On Nov. 6, voters in Pennsylvania’s 38th Senate District will have a choice of two candidates for state senator: Lindsey Williams (Democrat) or Jeremy Shaffer (Republican). Shaffer defeated Rep. Vulakovich (R), who currently holds this seat, in the 2018 primary election.

We asked each candidate five questions about their stance on key policies to combat hunger in Pennsylvania. We did not receive a response from Shaffer despite multiple requests, so we determined his position where possible based on public statements.

Williams’ full response is below the graphic. 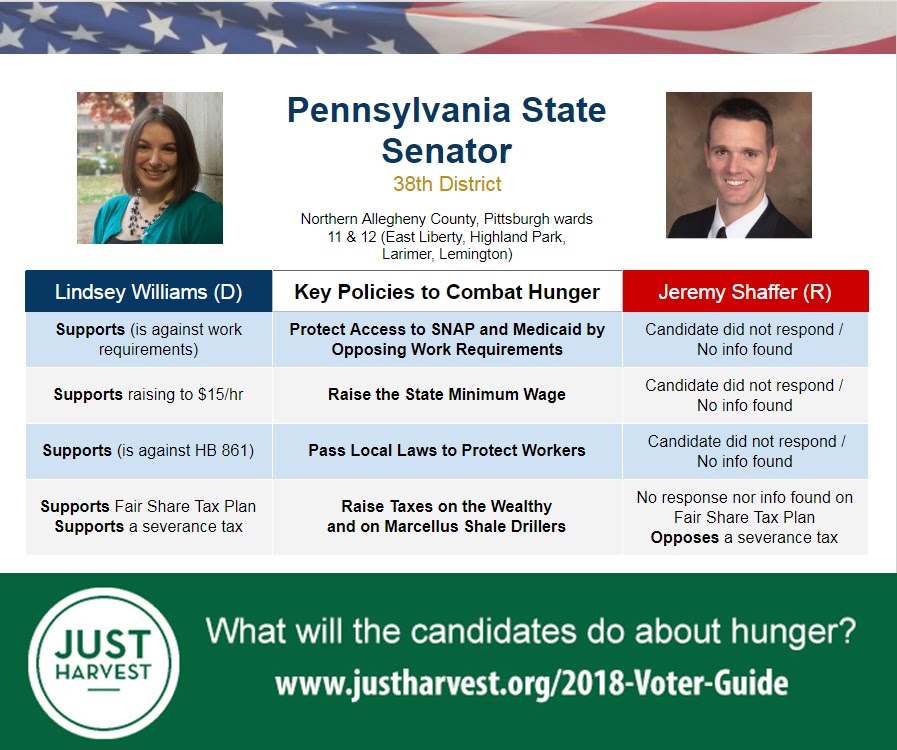 I oppose work requirements as a condition of receiving benefits, as the majority of recipients are elderly, disabled, or children who are receiving these benefits precisely because they cannot work.

I am a long-standing supporter of the Fight for $15 and a union. As a member of One Pennsylvania and former board member of Fight Back Pittsburgh, I have participated in and helped organize numerous marches and actions in support of this movement.

No, HB861 is a thinly veiled effort to strip protections from workers and LGBTQ individuals extended by local governments because state and federal governments refuse to do the right thing and enact these protections on a large scale. I strongly oppose this and any similar measure that takes authority away from local government to enact stronger protections for our vulnerable populations.

I support the Fair Share Tax Plan. We need to update our tax system to reflect the realities of current economics and ensure that incomes are taxed accordingly.

I support a Marcellus Shale severance tax. Pennsylvania is the only gas producing state without a Shale tax. Those corporations reap outsized profits while failing to pay their fair share.

Jay Walker is challenging Dan Frankel for State Rep.
The eight candidates for Governor and Lt. Governor of Pennsylvania