On Nov. 6, voters in Pennsylvania’s 23rd House District will have a choice of two candidates for the office of State Representative: the incumbent, Dan Frankel (Democrat), or Jay Walker (Green Party).

This district comprises parts of wards 4, 7, 14 and 15 in the City of Pittsburgh, including the neighborhoods of Squirrel Hill and parts of Oakland, Shadyside, Greenfield, and Point Breeze.

We asked each candidate five questions about their stance on key policies to combat hunger in Pennsylvania.

Both candidates’ full responses are below the graphic. 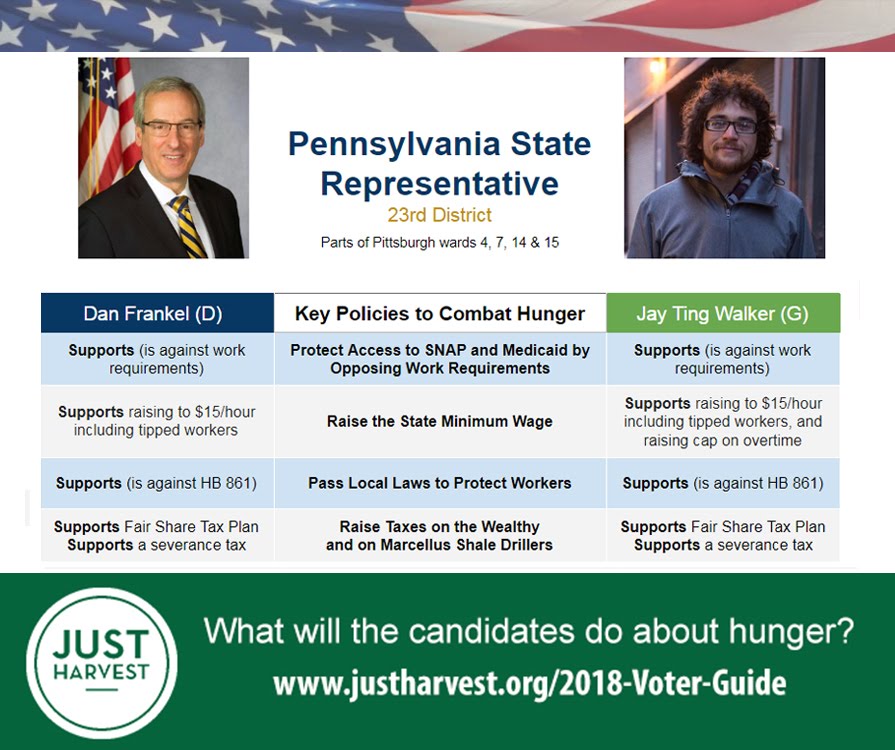 I have consistently opposed work requirements. Lack of access to healthcare and other services are an obstacle to employment. Hard-working families should not be forced to navigate more red-tape to access critical services.

Pennsylvanians should make at least $15/hour. Tipped workers must also receive a livable minimum wage. Currently, a sub-standard minimum wage makes tipped workers too vulnerable to the vagaries of patrons, and particularly at risk in situations of sexual harassment.

Absolutely not. HB 861 would nullify important worker protections fought for, community-by-community, in our state. When our legislature fails to pass or even consider bills that would protect LGBTQ workers from discrimination or allow most workers to take paid sick leave, municipalities step in. It would be wrong to undo their important work.

I support a progressive income tax structure that taxes wealthier citizens at a rate higher than our low-income residents. Our current structure and its reliance on sales and property taxes leaves lower income residents paying a greater percentage of their income than our wealthiest residents. That is clearly unjust.

Yes. I’ve been an advocate for effective taxation and regulation of the natural gas drillers since the inception of the industry. Pennsylvania is the largest gas producing state that doesn’t tax the extraction of our natural gas resources, while even very conservative states like Texas do. At a time when we face a serious structural deficit, it makes no sense to give away our natural resources without asking drillers to do their fair share.

Work requirements as a condition to access benefits are unacceptable and are used as excuses to deny people benefits and cut away funding for the social safety net.

The minimum wage should be at least $15/hr with no exceptions for tipped wages. We also need to raise the cap on overtime.

I do not support state laws that preempt local laws on taxes, public health regulations, or labor protections. I do not support HB861. This Preemption of Local Labor Mandates legislation would be directly opposed to the Green Party pillar of grassroots Democracy which prefers decisions to be made at the local level.

I 100% support the Pennsylvania Budget & Policy Center’s Fair Share Tax Plan. It is a core part of my platform. (I endorse the entire We the People program as seen on their endorsement page).

I would vote for a severance tax as proposed in Governor Wolf’s budget but I would not actively fight for it. The revenue is important but many in the environmental community believe that attaching our budget directly to fracking (beyond the impact fee) will make it much harder to untangle ourselves from the destructive practice. I would consider a rapidly raising tax on shale gas production as a way to create a de facto ban though.