On Nov. 6, all voters in Allegheny County will have a choice of four different party tickets for the highest office in Pennsylvania. Gov. Bob Wolf (Democrat) has held his seat since 2014. His gubernatorial opponents are Scott Wagner (Republican), Paul Glover (Green Party), and Kenneth V. Krawchuk (Libertarian).

Governors and lieutenant governors run together, like presidents and vice presidents do, and serve a four-year term.  John Fetterman is Wolf’s running mate this election because Lt. Gov. Mike Stack is resigning. Jeffrey Bartos (R), Jocolyn Bowser-Bostwick (G), and Kathleen S. Smith (L) are the other candidates for lt. governor.

We asked each candidate five questions about their stance on key policies to combat hunger in Pennsylvania. We did not get responses from the Democratic and Republican candidates despite multiple attempts, so we determined their stances using their official record and public statements.

The Green Party and Libertarian candidates’s full responses are below the graphic. 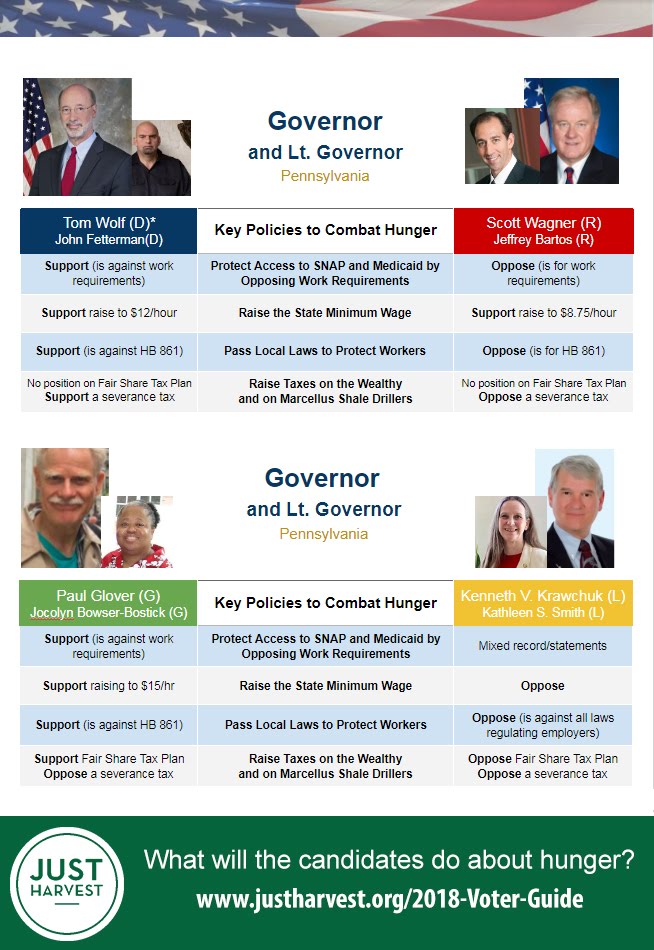 Glover: I oppose work requirements as a precondition for health care and food. Medical care is a human right. It is the greater requirement of “job creators” to create jobs. I am founder of the Philadelphia Orchard Project and a dozen more organizations that serve ecology and justice. http://paulglover.org

Bowser-Bostick: The minimum wage for everyone should at least be $15/hour with no exceptions.

Bowser-Bostick: State laws should not preempt local laws on taxes, public health regulations, or labor protections unless those local laws can be proven to be unconstitutional or the state laws are more beneficial to reducing income inequality and reducing the tax burden on those with low incomes, improving public health conditions or increasing the power or essential benefits to workers such as paid sick leave, paid vacations or the right to form unions. I vehemently oppose HB 861.

Glover: Yes, I favor the Fair Share Tax Plan. I favor a State Constitutional amendment which would establish progressive taxation, so that the rich pay their fair share.

Bowser-Bostick: Yes, I support the Fair Share Tax Plan and other fair tax measures that would increase state tax revenue like closing the Delaware Tax Loophole, progressive taxation and increasing the penalties on those who take advantage of tax havens as well as a greater emphasis on recovering funds lost to them.

Glover: Fracking poisons the future, so I would ban fracking. Therefore I oppose the severance tax, which would make our schools dependent upon fracking. I offer an eight-point plan to fund schools without fracking.  www.pinterest.com/pin/458733912016583485/

Bowser-Bostick: I am for the immediate ban of fracking for oil and gas in the Marcellus and Utica Shale regions therefore; it is useless to have a severance tax. More fines and criminal penalties should be assessed to more corporations that allow their business activities to poison our air, water and land. The fines should be at least tripled and these funds should be given to the people who have had their lives and/or livelihoods harmed by the pollutants emitted from these businesses. A small portion of these fines can be used also to help expand our use of 100% clean and renewable energy sources and the amount of green jobs.

Krawchuk: I am generally in favor of work requirements, but only where they make sense.  Our daughter is a leukemia survivor, and expecting her to fill any sort of work requirement during the first few years after remission would have been heartless and cruel.  But in other cases not only might the person be able to perform productive tasks, their self esteem and society would also benefit as a result.  The key question is: Who decides if a particular work requirement is reasonable?  Certainly not bureaucrats!  Doctors come instantly to mind instead, as would family members.  But in the case where someone is simply a poor worker who is always getting fired, a work requirement would provide some incentive for them to get their act together.  But all this treats only the symptoms, not the cause.  I am in favor of the Separation of Society and State where charity is not provided by coercive taxation, but rather by voluntary contributions.  Please refer to all the details on my website, www.kenk4pa.com/issues/separation-society-state/.

Smith: Education and job training should be integrated into a support system; because the ability to support oneself and one’s family creates independence. But lack of work should not be punished by eliminating publicly provided benefits.

Krawchuk: I do not believe in any minimum wage laws.  Minimum wages cut the bottom rungs off the ladder to success by reducing the number of entry-level jobs (thereby removing opportunities for the unemployed), contributes to inflation (by driving up wages and subsequently prices), forces businesses to overpay for skills (resulting in fewer goods or services), and lowers capital available for growth. The government should never interfere in the free market.

Smith: Minimum wages restrict entry into the job market by workers with low skills, and encourage replacement of human workers by technology, as evidenced by ordering kiosks in fast-food restaurants. They handicap small and family owned business at the benefit of large corporations that can afford higher wages; and lead to greater increases for higher skilled and waged workers. As a Libertarian I do not support a government mandated minimum wage.

Krawchuk: It’s a basic tenet of law that state law always supersedes local law, regardless of topic, so my opinion about it is moot.   As for HB 861, I believe that a hodgepodge of local laws are counterproductive, regardless of topic.  In general, decisions related to employment are best decided by the free market.

Smith: In the long run, cost increases due to variations in wages, targeted taxes, and regulations across diverse locations within a state will result in multi- unit companies relocating to the most favorable locales. Small, locally-based business will be the ones bearing the brunt of increased costs and are the ones least able to sustain the burden. These initiative are usually intended to affect major employers, but end up hurting small business which not only employ local workers; but also fund the social structure in a town through support of local groups and causes.

Krawchuk: As mentioned in my [next] answer, it is my goal to reduce taxes as much as humanly possible, not only for low-income citizens, but for all.  That would include vetoing all tax increases, aggressively use the line item veto to cut special interest and pork barrel spending, phasing out the personal income tax, reducing the corporate tax, and abolishing the absolute worst tax: the property tax.

Smith: I am undecided, due to lack of specificity regarding actual tax levels. As currently proposed the Fair Share Tax seems to assume that everyone holding certain assets, or having a certain income stream is “wealthy”. Businesses, farms, investments, and estates come in many sizes and belong to many different types of people. I would need to see far more detail to decide if it is actually “fair” to entrepreneurs, small business owners, seniors living on returns from investments, and family farmers, as examples.

Krawchuk: No, I do not support any sort of severance tax.  In fact, I lean in the opposite direction.  Taxes are already too high.  The reason taxes are so high is because spending is too high.  The cost of Pennsylvania’s government has been rising on average more than three times the rate of inflation for over 50 years!  In 1964, Harrisburg took an average of $100 per person, but today it’s over $2,500, and growing. It doesn’t matter if they’re Democrats in office or Republicans; the direction is always up.  When I’m governor, that trend will end.  I promise to veto every tax increase and aggressively use the line item veto to eliminate unconstitutional pork barrel spending on special interests.  If you’re looking for sustained revenue, the best way to achieve that is through a booming economy.  Tax cuts always spur the economy, and I plan to spur Pennsylvania’s like never before.

Smith: The shale industry has been a mixed blessing, but in many parts of Pennsylvania it has revitalized local economies. A tax that alters the competitive position of gas, as opposed to other fuels, could reduce the growth of the industry and result in job losses. Pennsylvania’s fiscal problem is more a careless spending issue than a tax issues.