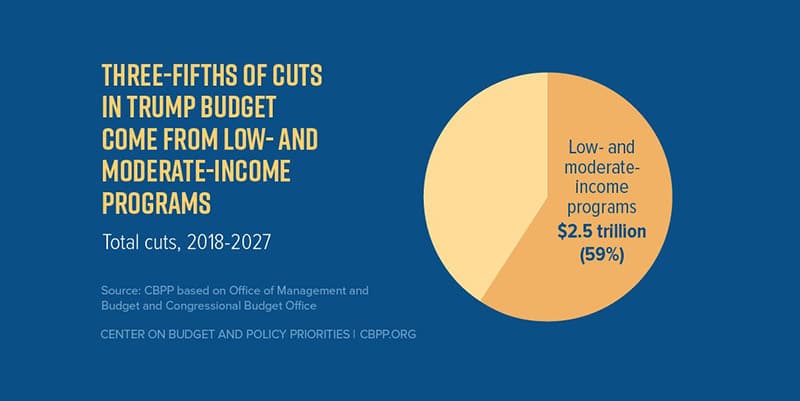 We need to stop Pres. Trump’s outrageous budget for the nation which takes an unprecedented $2.5 trillion from struggling households and middle class families so he can give $2 trillion in tax cuts to millionaires.

Trump campaigned on a promise to help the people who need it most. But since becoming president he’s repeatedly put forward policies that will harm most Americans. Now he is threatening one of our most basic rights: to food.

As of last count in 2015, 43.1 million Americans, including 14.5 million children, live below the federal poverty level ($24,600 for a family of four). However, research shows that, on average, families need an income of about twice that to cover basic expenses. Using this standard, 43% of U.S. children now live in low-income families.

In order to provide more food security to low-income Americans, federal government programs ensure basic living standards so that those who are struggling in this country don’t starve in the streets. These programs are not just a handout but a way to get people back on their feet, promote their health, and provide many economic benefits to our communities. 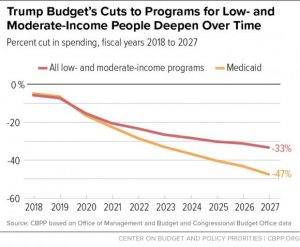 However, in Trump’s new budget, he attacks all of the programs that protect the basics in this country, reducing their already low funding by more than a third over the next 10 years. These critical programs help keep food on the table, roofs over people’s heads, heat in the winter, and prevent people from sliding further into poverty. Trump’s budget would devastate these programs and the many low- and moderate-income Americans — including millions here in Pennsylvania – who depend on them.

Sen. Toomey has said he is “encouraged” by Trump’s proposed budget and the cuts it makes to so many critical federal programs while spending more on defense. Toomey said he supports “pro-growth tax reform, rolling back excessive regulations, balancing the federal budget, and cutting duplication and waste.”

Toomey apparently isn’t bothered by the duplication and waste of Trump’s double accounting hijinks — how he gives away trillions to the richest 1% through tax cuts for the wealthy and loosened corporate regulations. Toomey doesn’t seem to care that type of wealth redistribution never trickles down to benefit the rest of us — it never creates jobs, it’s not tax reform, and it’s definitely not a balanced budget.

Let’s remind Sen. Toomey of his campaign promise not to be Trump’s rubber stamp. Remind him that he is a legislator for more than just the wealthiest 1%. Urge him to protect the programs that can create true economic security here and across the country, and ask him to stand up for all Pennsylvanians.

Scroll down to see what you can do! 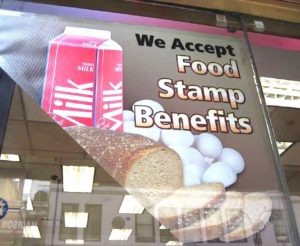 The Supplemental Nutrition Assistance Program (SNAP also known as “food stamps”) is the nation’s largest nutrition assistance program. Trump’s budget would cut SNAP by nearly $200 billion in 10 years, in part by expanding current food stamps work requirements and by shifting a large chunk of program costs to the state. These costs would of course be shifted onto state taxpayers, who would also have to shoulder the huge societal costs of increased hunger and poverty.

Temporary Assistance for Needy Families (TANF) contributes to state funding for short-term cash assistance, job training and education programs, and other crucial supports for poor families with children. Already a mere shadow of what help for families in poverty was before 1996 “welfare reform,” Trump’s budget would cut the program by $22 billion over ten years. Such a cut would directly contradict Trump’s stated goals of supporting work opportunities to poor families so that they can escape poverty and achieve self-sufficiency. 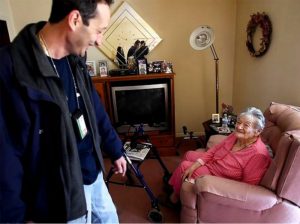 The list of needed reality checks go on and on.

This budget is clearly a war against the poor and middle class. It wrecks the protective government programs that have allowed so many millions to move out of poverty and instead turns the nation’s coffers into a slush fund for the elite.

Rather than taking away critical opportunities for struggling households, Trump and Toomey should be investing in our families, our workers, and our communities. That is the best way to create a strong Pennsylvania and a secure nation. And we deserve no less.

We are glad to be taking action with you!