Poverty persists in this country, as do government programs to help. But some do less today than before, despite growing need.

Far fewer people are “living off welfare” than common, decades-old myths and misperceptions (and the politicians who promote them) would suggest. In fact, one could argue that number is zero if you define “living” as anything more than grim survival. 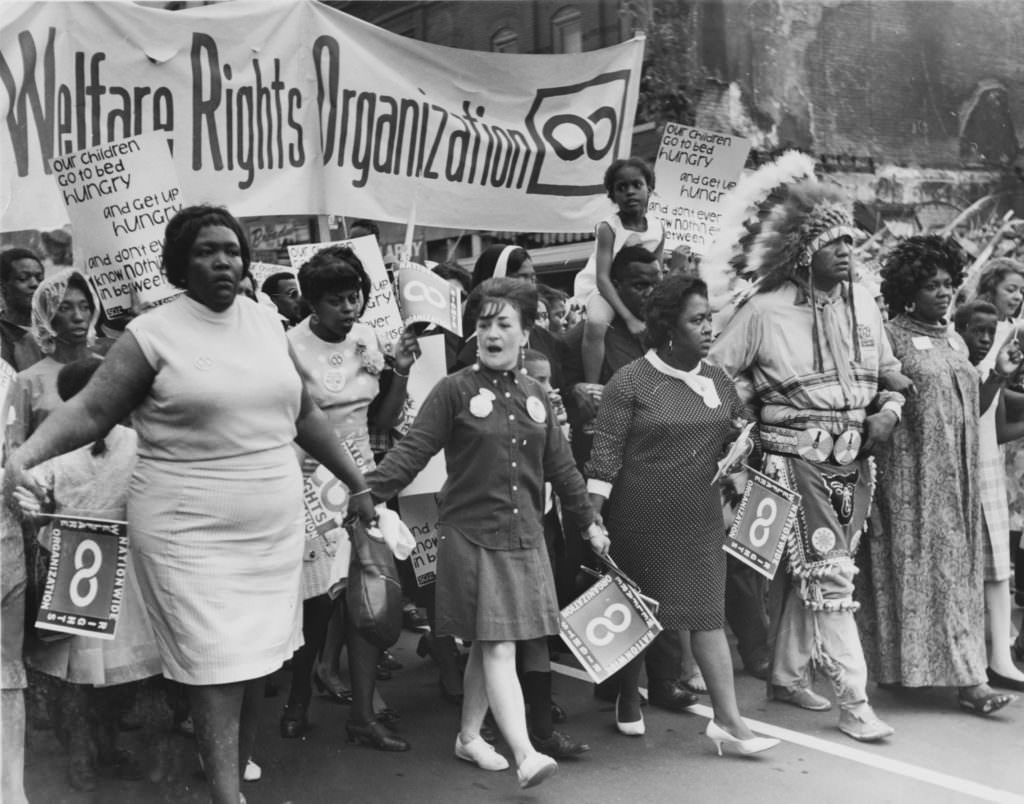 Organizers and volunteers from the National Welfare Rights Organization, marching to end hunger in 1968.

When we talk about “Welfare,” most of us usually are talking about government aid—specifically, the government’s direct distribution of cash to people in deep poverty to help them meet their basic needs. Sometimes – especially when opponents of a strong government safety net want to focus attention on how big and expensive it allegedly is – people use “Welfare” to mean a whole range of other components of the safety net that all of us provide together with our tax dollars to meet human needs. Maybe they are counting food stamps or medical assistance or school lunches or social security disability or other things that are a lot larger than cash assistance.

We hardly ever use “Welfare” to mean all the things we might do together “to promote the general welfare”, which is one of the six fundamental purposes of the United States government listed in the preamble to the Constitution. (You can look up the other five.) And we hardly ever use “welfare” to describe the financial aid that goes to the middle class and wealthy in the form of home mortgage interest tax deduction, federal crop subsidies, or taxpayer-financed baseball stadiums.

Usually, “welfare” means the specific federal program of direct cash assistance to families in deep poverty delivered in our state by the Pa Department of Human Services – officially known since 1994 as Temporary Assistance to Needy Families, or TANF for short. What was originally the Aid to Dependent Children program was created by the Social Security Act of 1935. (In addition to the nation’s first programs of old-age pensions, this Act instituted unemployment compensation and help to blind people.) It later became Aid to Families with Dependent Children, and, in 1996 welfare reform, became TANF.

How welfare has changed…

AFDC looked a lot different in 1975 than TANF looks today. On the positive side, caseworkers no longer inspect people’s homes to see, for instance, if the amount or quality of furniture one has would set off alarms about undeclared wealth or if – heaven forbid – there was evidence of a man living in the home whose presence would render the single mother ineligible.

Also on the positive side, technology now enables people to apply for benefits online and to wait on hold on the phone to speak to a caseworker instead of waiting in line at an office. However, there are far fewer physical offices than there used to be if you do need to talk to someone in person about your benefits.

Depending on your point of view, it might be positive or negative that now – unlike in 1975 – for nearly everyone on TANF today there are work requirements and a 5-year lifetime time limit on benefits. Whatever you think of such things in theory, the evidence is clear that work requirements don’t actually reduce poverty.

Locally in Allegheny County, the drop is “only” about 74%. This would be a good thing if it was because fewer people were poor. But there are almost 200,000 more people in poverty in PA today than 40 years ago.

…and how it hasn’t

Another thing that hasn’t changed is that applying for and getting these benefits is hard—the hoops people had to jump through to get help. Still today, about 7 out of 10 people in Pennsylvania who apply for cash assistance get turned down. 7 out of 10. 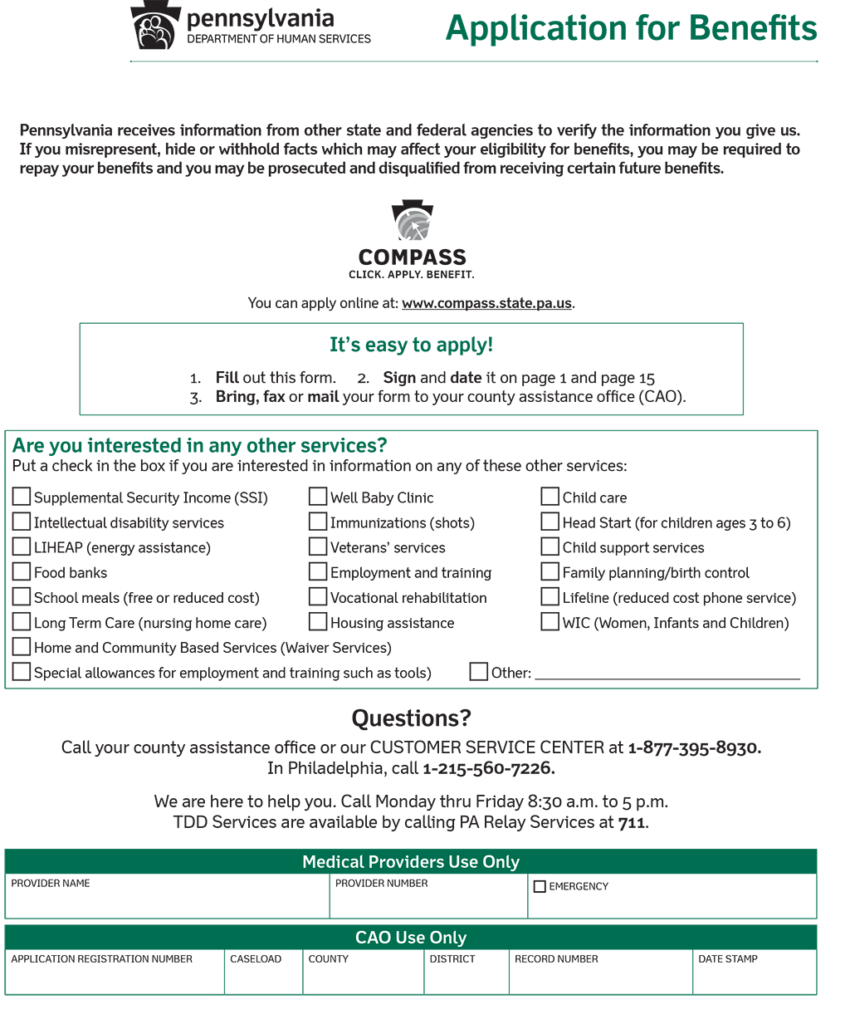 Although you can use a computer these days to complete the application, here’s what it looks like on paper. All 15 pages – and those are the middle 15 pages of a 32-page booklet that also contains several pages of other instructions and fine print about “Your rights and responsibilities”, privacy protection of your health information, etc.

You may be saying to yourself – well, that’s the government for you – all red tape.

So for comparison purposes, here is another form, which is one page plus one page of fine print instructions. It is also from our government: the Application for a Pennsylvania License to Carry Firearms.

And now you may be saying to yourself, “Well, we have a constitutional right to bear arms, so of course the form is short.” But here’s another one, also just two pages: the Application for a Pennsylvania License to Sell Firearms.

About a mile from my house is the East Liberty office of the welfare department. It is open from 7:30 am to 5 pm, Mondays to Fridays. This works out to 47.5 hours per week of availability.

Another quarter mile away is another state government office, but that one is open 9:00 am till 10:00 pm on weekdays and Saturdays, and even for eight hours on Sundays. A total of 86 hours a week. But you can’t go there to apply for TANF or food stamps or medical assistance because it’s a state store.

Ultimately, government policies – about receiving welfare, subsidizing mortgages or baseball stadiums, or about selling guns and buying liquor – are about what we value as a society. Shouldn’t times have changed for the better and government’s ability to help those in need improved?

Ken is Just Harvest's executive director. You can read more about him here.
View all posts by Ken Regal →
Take Action: Increase the SNAP minimum benefit in PA
FAQ about Pandemic EBT (P-EBT) for the 2021-2022 school year in Pennsylvania