On January 1, 2015, a new state healthcare coverage plan called Healthy PA will go into effect across Pennsylvania. Enrollment in the new plan begins December 1 and is open to low-income and unemployed non-elderly households who may not have previously qualified for Medicaid and who aren’t able to afford private insurance in the marketplace.

Healthy PA, Governor Corbett’s alternative to a key component of the Affordable Care Act, will have an impact on the state’s uninsured but it will also bring changes for those currently on Medicaid, MAWD (medical assistance for workers with disabilities), and SelectPlan for Women.

Not all of the changes will be positive, and none will be as good as what was originally planned: outright Medicaid expansion for Pennsylvanians living below and just above the poverty line.

What is Medicaid Expansion?

When President Obama created the Affordable Care Act, otherwise known as “Obamacare”, he intended it to address the problem of the nation’s tens of millions of uninsured. When the Affordable Care Act was signed into law in 2010 it required citizens to purchase private health insurance in a new federal health insurance marketplace. It also required states to expand free Medicaid coverage to those without the income to afford insurance on their own.  The penalty for states that failed to do so would be the loss of millions of dollars in federal Medicaid funding.

Unfortunately, 28 states sued the federal government to try to stop Obamacare. The Supreme Court ruled on the lawsuit in 2012 that requiring people to have health insurance (as the Affordable Care Act does) is constitutional but that requiring states to put Medicaid expansion in place is not. That meant that states were not required to expand Medicaid but could still chose to.  Expanding Medicaid would still be almost entirely paid for by the federal government and would cost the states very little.

What is Healthy PA?

Governor Corbett has so far refused to take federal funding granted under the Affordable Care Act to expand Medicaid eligibility outright and provide free coverage to uninsured low-income Pennsylvanians. Instead, he devised his own plan to expand health coverage called Healthy PA, which would use those federal Medicaid dollars to enroll low-income Pennsylvanians in private health insurance plans.

However, the revised Healthy PA plan still includes severe Medicaid benefit cuts for those currently on Medicaid as well as some pretty problematic conditions for those coming on.

As originally proposed, Healthy PA was even worse. It contained harsh work search rules for coverage recipients and even harsher cuts to existing health services. Public outcry and action by federal policymakers led Corbett to withdraw these measures before submitting Healthy PA for federal review.

But make no mistake: even as it stands now Healthy PA is not a recipe for health. Although 600,000 Pennsylvanians will gain health coverage, Healthy PA: 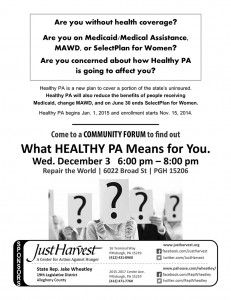 Medicaid expansion is a better solution, one that the new governor-elect, Tom Wolf, has pledged to pursue. With it would come more comprehensive free coverage for Pennsylvanians in poverty and $4.8 million per day in federal funding that could be adding jobs, boosting the economy, and raising wages.

In the meantime, we are stuck with Healthy PA, so if you are uninsured, you should seek to enroll, and if you are currently on Medicaid, get informed about what Healthy PA will mean for you.

How to get help

We have a series of fact sheets with detailed info about Healthy PA here.

If you have questions about Healthy PA or Medical Assistance benefits:

If you are applying for Healthy PA and need help with your application:

If need help resolving problems related to Medicaid or private health coverage or are uninsured and need assistance with access to care:

Green vs. Gray: ALCOSAN’s stormwater plan is all wet
A vote for Pittsburgh Gifted Students can help the Food Bank