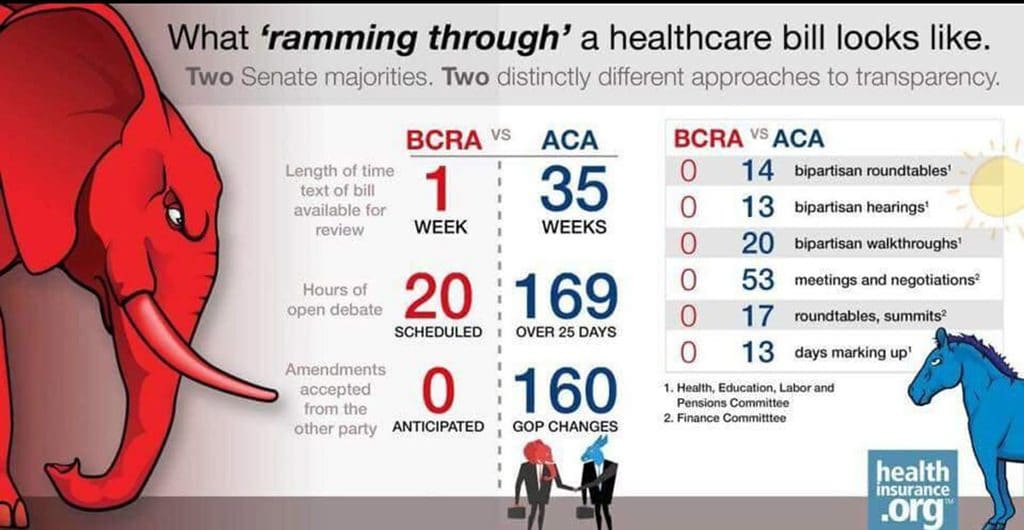 Late last week, Republican leaders in the U.S. Senate released their plan to repeal the Affordable Care Act. Senate leader Mitch McConnell is pushing for a vote on it this week. Bottom line? It would remove health coverage from 22 million Americans.

The Senate health care bill kills coverage in two ways: In addition to savage cuts to Medicaid, the bill would end Medicaid expansion. Its Marketplace insurance plans would charge more and cover less than even the lowest-coverage ACA plan1. (And if your health insurance lapses at any point, you’re locked out of coverage for six months.2

Why does an anti-hunger organization like Just Harvest care about access to health care coverage? Because health care costs are often what plunge vulnerable people into hunger and food insecurity.

And in the case of health care in this country, the new Senate Republican bill makes nearly everyone vulnerable.

[Ready to take action? Scroll down.]

Why you should care about what the Senate bill does to Medicaid
Medicaid is a relatively low-cost and cost-effective federally funded social program that provides health coverage to nearly 1 in 5 (74.5 million) adults and children – many more than the 12 million Americans now covered through the insurance Marketplace3.

The new Senate bill written by Republican leaders to repeal the Affordable Care Act would end funding for Medicaid expansion by 2024, severely cap federal spending on Medicaid, and a number of other horrible things8. Cynically called “the Better Care Act” (BCRA), it’s in some ways even worse than the version Republicans in the U.S. House passed last month9, which was stunningly awful.

The Senate’s attack on Medicaid could take $24 billion out of Pennsylvania’s coffers over the next 10 years and then cost us $3 billion/year after that10. Our state would then be left in an impossible situation: pick up the bill to help these adults and children keep coverage and likely have to make cuts in other areas of government services? Or watch them die? 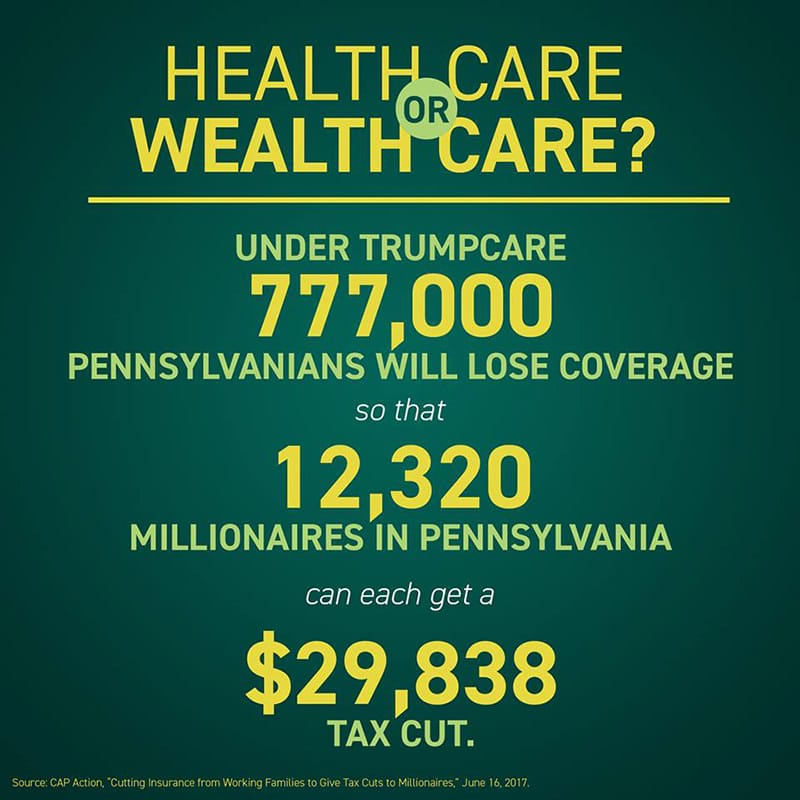 ….all to give more money to the wealthy
Like the House bill, the BCRA would transfer what the government spends on health care for low-income and middle-class Americans to the wealthy and to insurance companies. And it does this to such an extent that it leaves few low-income people able to buy health coverage at all11.

“The tax cuts in this legislation alone would amount to some $700 billion over a decade, according to the Center on Budget and Policy Priorities. About $33 billion of this would go to tax cuts conservatively averaging $7 million every year to each of the 400 highest-income families in the country… enough to pay for the expansion of Medicaid in Nevada, West Virginia, Arkansas and Alaska.” 12

How could a health care bill take health coverage from low-income and middle-class families just to give tax breaks to people like Pres. Trump and many of our legislators? Because it’s not really a health care bill. It’s a wealthcare bill.

Week 4: Come to our next Action Against Hunger Team monthly meeting
Fresh Access shoppers at the North Side farmers market