On June 24, advocates stood with Democratic state senators amid the marble and gilt halls of Harrisburg’s Capitol building. The contrast between the setting’s grandeur and the lives of those they were speaking out for was stark.

They were urging their colleagues in the State Senate as well as Gov. Wolf to reject HB 33, a cruel House of Representatives bill to end General Assistance. GA is the state’s only emergency cash assistance program for adults without children. The bill had passed the House days earlier in a party line vote.

General Assistance provides a small amount of cash support – about $200 per month – to a small, targeted population of Pennsylvanians in urgent need of help. The recipients are typically unhoused, women fleeing domestic violence, and people transitioning out of addiction treatment. 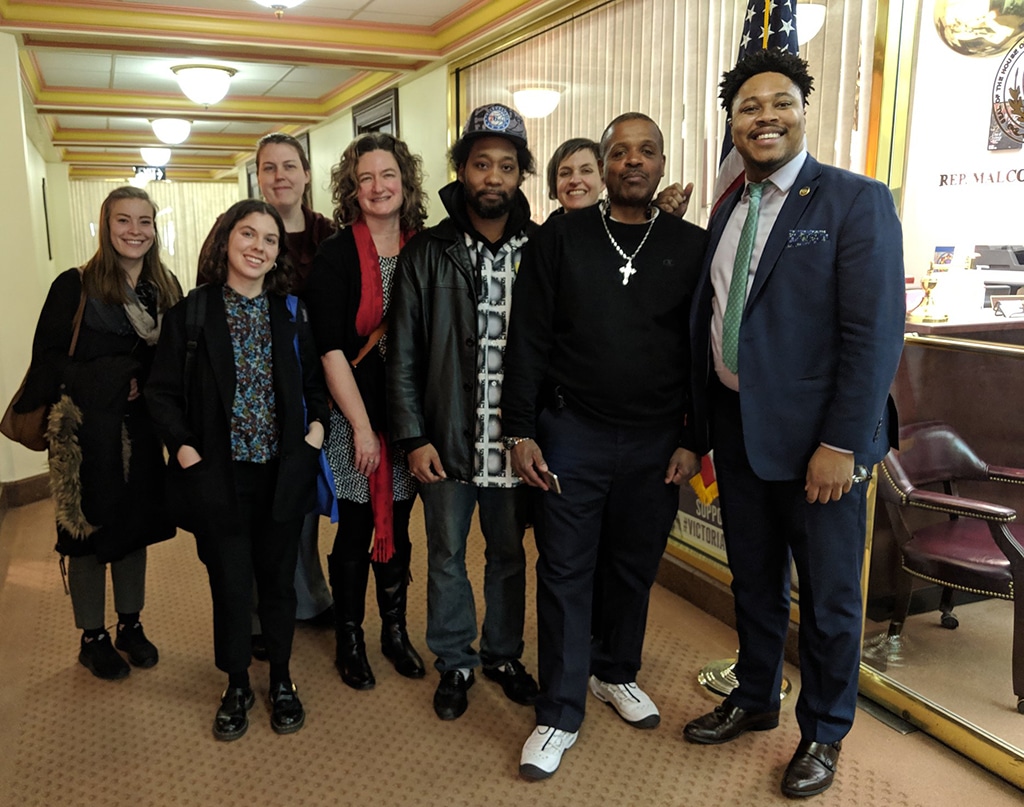 But no sooner was the program reinstated last fall then state Republican leaders avowed a refusal to fund it. Their aim was to eliminate it again.

Unfortunately, despite all our best efforts, they prevailed. HB 33 passed the Senate on a party line vote on June 27. Gov. Wolf signed it the next day; a House committee had attached funding for hospitals to it before passage, making it hard to veto.

Rest assured, we will continue working with our allies to determine how the state can restore help to those who need it most.

Join us and state senators Williams and Iovino on November 25 to help move forward their bill for an Emergency Relief Fund. It will help fill the gap for desperate Pennsylvanians!

Below are the June 24 remarks of our public policy advocate, Ann Sanders, in support of General Assistance. 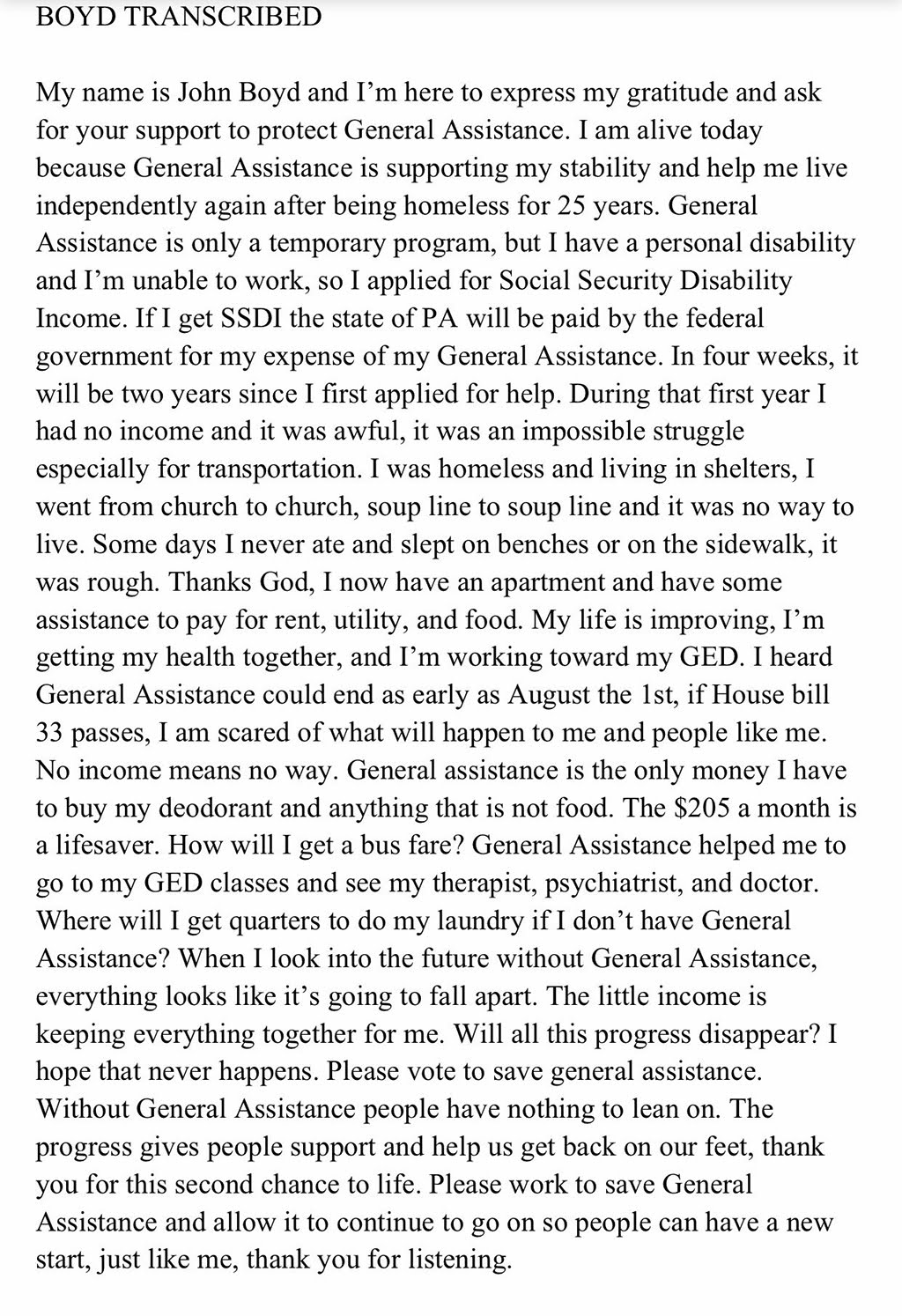 Sen. Muth tried to read this letter in support of General Assistance from recipient John Boyd on the Senate floor before the vote. She was shouted down by Senate Majority Leader Jake Corman.

Just Harvest works to build an accessible and fair system where people can meet their basic needs. Our primary focus is hunger, but hunger intersects with housing, health, transportation and other needs – if one isn’t met often other needs aren’t met.

Since General Assistance started back up, I’ve had the opportunity to meet face to face with some folks who have needed help applying. I’m going to share a little bit about their stories to show how targeted and specific this program is towards the most vulnerable Pennsylvanians.

The majority of folks receiving assistance have a short-term or permanent disability. This is because in order to receive GA not only does your income have to be less than $200 and your savings be less than $250, you also have to prove that you are in a category that is not expected to be able to work.

The people I’ve met with have: still suffer from PTSD after surviving years of domestic violence, depression, anxiety so crippling that the pace of fast food work triggers panic attacks, arthritis, compressed discs, and heart complications.

These aren’t folks who are just experiencing a small bit of bad luck, they are weathering some of life’s toughest storms.

One woman I spoke with was so happy about GA coming back so that she would have money for bus fare to go to treatment. She had been fighting a cold for about a month and couldn’t go to treatment because she couldn’t make the 2, 3 mile trek up Forbes Ave to her appointments in the rain.

Another woman I spoke with has a seizure disorder. She was trying for the 3rd time to apply for SSI. Between her condition and lack of access to transportation, she was unable to go to appointments and provide documents and had been unsuccessful. She mentioned that she had received General Assistance before, and she remembered when they stopped it. I asked her, what have you been doing to get by in the six years since it ended? And she said she had been on and off the street in and out of shelters, for six years.

General Assistance isn’t a lot of money, it’s only $200 a month. But it’s a bus pass, toiletries, just enough to access county housing or pay friend to stay on their couch without putting them out. It’s a trip to the laundromat, a hair cut. It’s not much, but it’s some stability and some dignity in a difficult time.

If someone needs shoes or deodorant or feminine hygiene products, they should be able to fully participate in society and go to the store and pick what they want that meets their budget. If they need coins for laundry machines, they shouldn’t have to apply for a special laundry voucher.

Ending general assistance will strip people of the dignity of personal choice.

General Assistance is small, but it’s a critical lifeline for people who are weathering some of the worst of life’s storms. In all budgets, but especially a budget season where we hear the words surplus and talk of putting cash in the Rainy Day Fund- we have to remember that it’s still raining for a lot of Pennsylvanians. We have to fully fund General Assistance.