By Just Harvest on October 11, 2019 in Barriers to Benefits, Take Action! 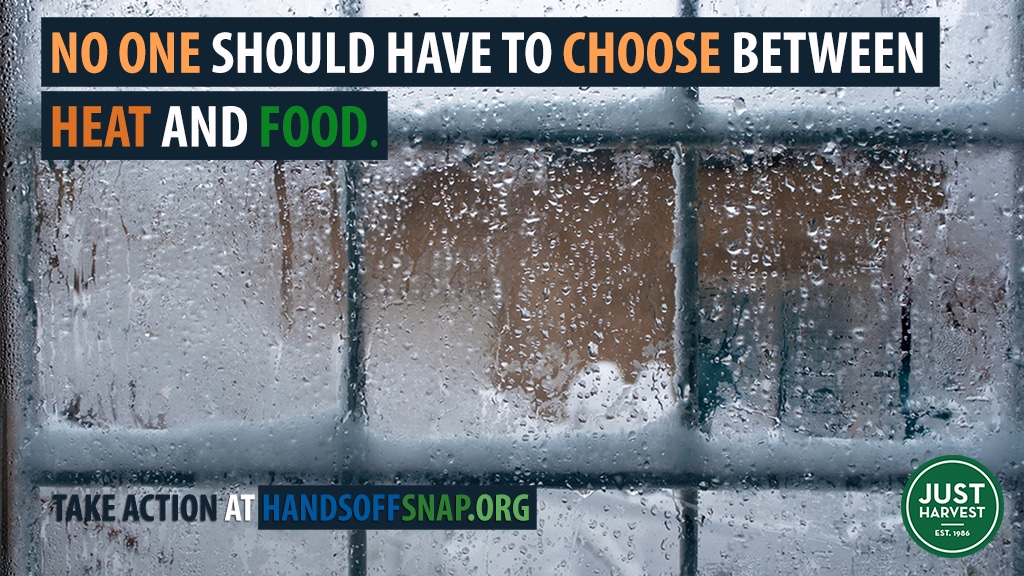 The Trump Administration wants to undercount people’s heating costs so they can decrease their SNAP benefits.

On October 3rd, the Trump administration put out their third proposed rule change in a year that weakens and undercuts SNAP/food stamps, the nation’s cornerstone anti-hunger program. This comes on the heels of their announced plans in August to further limit access to SNAP.

This time, the administration is taking aim at how states calculate a household’s utility expenses to determine the amount of food stamps they get. The proposed rule would force states to forego their standard estimate of utility expenses and use a different one that is frequently lower than what people actually spend — particularly in cold weather states.

This would affect low-income people for whom housing and utilities make up more than half of their income — typically seniors, people with disabilities, and low-income working families. Underestimating their heating costs means underestimating how bad their financial situation is. These households then couldn’t qualify for the level of food stamps they actually need and deserve. This will make their struggle to afford the basics that much harder.

The Effects of the Rule Change

In the nation’s wealthiest country people shouldn’t have to choose between heat and food. This rule doesn’t lower folks’ heating bills, it just decreases the relief SNAP applicants can receive. Their heating and housing bills will remain high but their food allowance will shrink.

Nationally, the rule change would cut program benefits by a total of $4.5 billion over five years. As a result, almost 1 in five families nationwide would see a benefit cut.

According to USDA’s own analysis, this rule would result in more than half of Pennsylvania families seeing a reduction in their SNAP benefits.  The total amount of benefits given to Pennsylvanians and spent in grocery stores would drop by nearly 10%.

SNAP is vital to improving the health and well-being of low-income families. In 2018, it helped keep 3 million people out of poverty.

We need to be improving access to SNAP for those in and near poverty while working to reduce the overall need for it. Hacking away at a program that helps the hungry is a cruel and counterproductive way to address hunger.

TAKE ACTION TO FIGHT BACK!

1. SUBMIT A COMMENT TO THE US DEPARTMENT OF AGRICULTURE OPPOSING THE RULE CHANGE.

The USDA is required to review and respond to all public comments before finalizing and imposing the rule. The 60-day public comment period on the rule ends December 2, 2019. The more unique comments, the longer before the final rule can be issued. This is a critical way to make sure your voice is heard.

2. INVITE OTHERS TO A COMMUNITY EVENT TO LEARN MORE AND SUBMIT COMMENTS.

Join Just Harvest and our allies on October 22 in downtown Pittsburgh to take action against this rule.