By Sasha Henry on September 30, 2015 in Get Involved, Not just a number 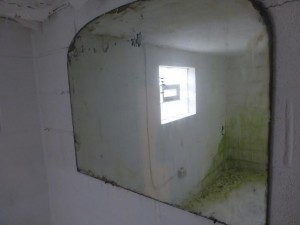 Snapshots of Poverty: Green mold in the basement of photographer Linda’s house

Seeing the suffering of others can be hard to bear.

How do you cope? Do you try to avoid witnessing human misery altogether?

For many that misery evokes anger – at the victims. Perhaps they believe we live in a just world, so those who suffer must somehow deserve it. “They brought it on themselves because (___). If it weren’t for that they wouldn’t be in this situation.”

Yet experiences of tragedy and adversity – even second-hand – are what build empathy. They open the hearts of others and can become the foundation of building a stronger community, one based on caring and support.

There is a strong history surrounding the influence that candid photographs have in creating powerful social movements. The most well-known example is likely the photos of journalist and social reformer Jacob Riis’s How the Other Half Lives, which revealed the harmful living and working conditions among immigrants in New York City’s slums during the late 1800s. It resulted in the tearing down of tenements and sweatshops and reforms of the city’s schools. Photographs evoke the emotions usually hidden behind the crumbling walls of a home, the boarded up windows of a business, and the debris of a once thriving neighborhood.

A more recent and equally powerful example is Witnesses to Hunger, created by Drexel University in Philadelphia in 2008. The project has turned its participant photographers, mothers living in poverty, into effective, nationally recognized advocates. 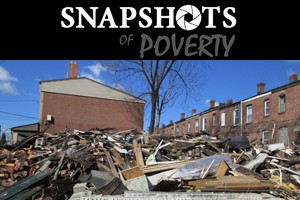 The exhibit runs from Oct. 9 until Nov. 6.
Join us at the closing reception.

Inspired by Witnesses, the five photographers in our Snapshots of Poverty project illustrate the unfiltered and unedited narratives of the injustice that a large portion of our region – nearly one in seven people here in Allegheny County – faces today. New federal data show that the numbers of those in poverty, both nationwide and locally, have barely budged in the past year. Moreover, poverty in our region is still higher than it was before the great recession of 2008.

What these numbers don’t capture is the unwavering hardship of poverty that those who face it must endure. But our five Snapshots photographers make those hardships visible:

These photographs capture the intense injustice that shapes the everyday existence of each photographer, and show the ways that poverty constrains their narratives. Instead of living lives of their choosing, they are living lives determined by larger systems and policies – some put in place before they were even born. Yet the act of photography also allows them control over their surroundings, a way to escape their confinement, by choosing aspects of their stories to tell in a public space.

This exhibit has the ability to open the eyes of many to the inequality that exists throughout our region, our commonwealth, and the nation. True, even some who view these photos may never really understand the struggles of those who took them. But among those who do empathy will grow, and progress has a better chance to prevail.

We invite you to view these photographs and bear witness to the lives they represent. By spreading the message contained in these photos you can replace common misperceptions with reality. You can create awareness, empathy, and, most importantly, the will to end poverty, once and for all.

Sasha Henry is a recent graduate from the University of Denver with a bachelor’s degree in international development with a focus in human rights, security and international organizations. She has done a variety of volunteer work within Pittsburgh as well as for organizations within Nicaragua, Mexico and Russia. She began serving in August 2015 as the communications intern for Just Harvest in order to be a part of the food justice movement.
View all posts by Sasha Henry →

One Response to Snapshots of Poverty: Five photographers, one focus