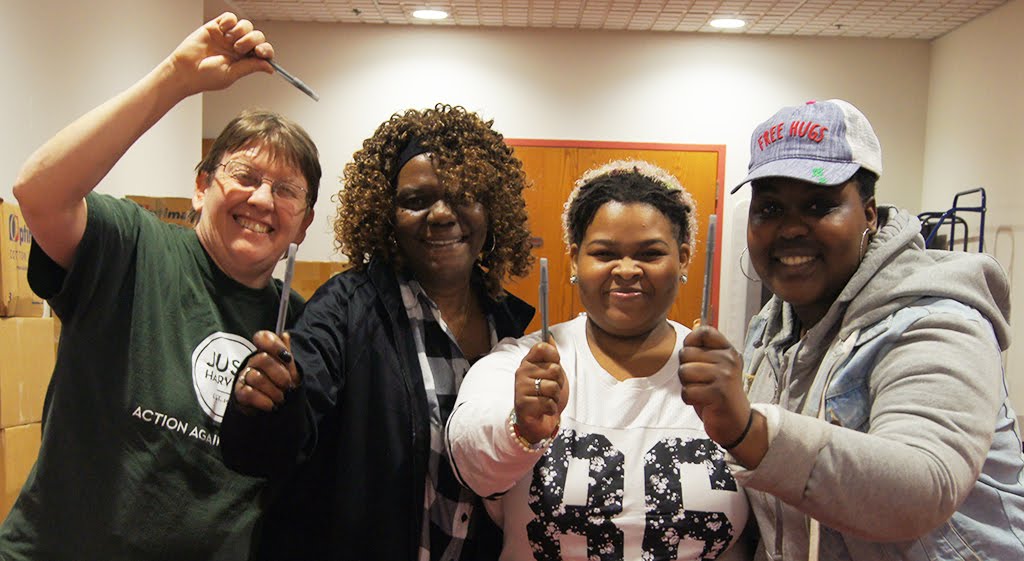 Toni Harper speaks from years of experience as a nurse when she states emphatically, “You can almost look at hunger as a treatable disease. A disease that we as a society can do something about.”

Toni also speaks as someone who experienced years of hunger insecurity, both as a child and as a parent. This partly due to local government actions that ravaged the Hill District neighborhood.

In building the Civic Arena the City of Pittsburgh and the Urban Redevelopment Authority shattered a diverse community.  They bulldozed hundreds of homes and businesses, displacing 8,000 people in 1961, the very same year Toni was born.

The “urban renewal” that tore apart many low-income and black communities destroyed thousands of people’s livelihoods and community networks forever. This plunged many of these families into poverty. Although her mother often worked more than full time, there were years her own family would not have made it without safety net programs such as food stamps.

Toni spoke with passionate rejection of the stigmas that came along with that hard-working poverty and the use of such programs. “I remember that my mother often would have to run around the house hiding the television, the phone, the toaster because if the case workers saw those things they would look at us like we really didn’t deserve those benefits.” She remains emphatic that such programs are earned by low-wage workers, but should be a human right for everyone, whether or not they can work.

Toni’s struggles as a child inspired her to care for others. Thanks to the Job Training Act of 1982, which paid for tuition and books, Toni graduated from the Connelly School of Nursing with an LPN. It took time for her to find a job after graduating and she once more relied on food stamps during that year to care for her own children. But she soon found a job as nurse working with older people, and gerontology remained her passion throughout her career.

Toni (far right) with other Just Harvest members and PA Rep. Dan Miller (center) at a lobbying visit in Harrisburg in April, 2019.

Although Toni has now retired from nursing, she is more determined than ever to nurture her community. When she returned to school for a psychology degree, she found that many of her fellow students were going hungry. So she developed a school meal plan for low-income students that the entire CCAC system will adopt next year.

When she came to her first Power of the Pen organized by Just Harvest in March, she made up her mind to become a Just Harvest member. She is determined to help organize and fight for policy solutions to hunger, which she asserts is entirely preventable.

Toni has since represented Just Harvest in public hearings, in meetings with state legislators, and at rallies for a living wage, general assistance, and dedicated funding for public transit.

“If you’ve ever suffered from hunger, you want to give back. I want to be an advocate and open doors for the next generation.”

Help address the root causes of hunger. Stand by Toni as a Just Harvest member.

Helen is Just Harvest's grassroots organizer. You can read more about her here.
View all posts by Helen Gerhardt →

Member Mike Hughes is no stranger to hardship, or service
Trying to save cash assistance for the poorest Pennsylvanians