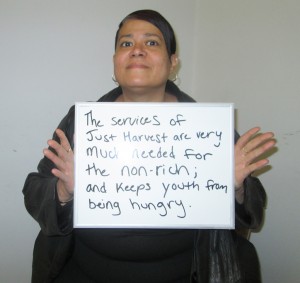 Theresa is a massage therapist from Baldwin, where she lives with her school-age son. She is a single mom working hard to provide for her and her child. She also has an adult son living on his own.
Theresa has been coming to Just Harvest to have her taxes done for at least five years, and is grateful for the service.

In June of 2011, Theresa tore her meniscus, which required surgery, and was out of work for 8 months. During that time she also suffered from a bulging disk and had a lot of lower back pain as a result of using crutches that were not the right height.

Theresa was fortunate to receive unemployment during this time of limited mobility. She worked two part-time jobs before the injury, but afterwards returned to only one. She thinks she went back to work too soon; she experienced a significant amount of pain that she still suffers from.

As a single mom, Theresa has needed to access public benefits, including food stamps, to supplement her income. She shares, “If I didn’t get what I got we would be homeless and hungry.”

When asked about her thoughts on our elected officials, she said, “It runs deeper than people realize, but there’s so much waste in government. When reporters ask questions, politicians don’t directly answer. They skip around it. I want a direct answer. What changes will you make?”

She went on to give examples of waste in government, such as flying across the state when they would have plenty of time to drive, and spending money on expensive lunches and dinners.

“Instead of cutting things people need, why can’t you cut your expenses that are unnecessary? Politicians should have receipts for everything and constituents should be able to see them. We elect you; you work for us.”