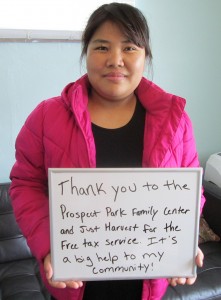 Ngun’s journey to the U.S. was not an easy one. But after receiving public assistance to help with her transition to a new life here she is extending that same helping hand to others in her community.

Ngun lives in Prospect Park with her husband and two kids ages 4 and 17 months. Her husband works at Strip District Meats, while Ngun enjoys working at home and raising their two kids.

Ngun has been coming to Just Harvest for the past three years to have her taxes done, and this year began volunteering at our Prospect Park tax site to translate for families who speak very little English.

Many of them have stories similar to hers. Ngun and her husband fled their native Burma where they had been persecuted as ethnic minorities by the military state. They lived in Malaysia while trying to obtain approval from the United Nations to enter the U.S.

Her husband was granted approval in 2008, but Ngun was not.

Ngun continued to live in Malaysia for two more years before she was granted approval.  It was difficult for the couple to live apart though they talked on the phone as often as they could.

They both were afraid that she would never gain approval.  She had to be very careful in Malaysia because the police were actively looking for people like Ngun and would send them back to their birth country if caught.

Ngun worked and supported herself while under the constant fear of getting caught.  Finally in 2010, she was granted permission by the U.N. and could be reunited with her husband here in Prospect Park.

When she first arrived she received food stamps, Medicaid, and a one-time cash assistance benefit of $200.  This was really helpful to her because she had very little when she arrived.

Ngun and her husband plan to save their refund and put it towards buying a house someday.  They love living in Prospect Park and hope to buy a home in that same community.

Paw, a tax client: From Thailand to the South Hills
Mon: A tax client and volunteer from Bhutan