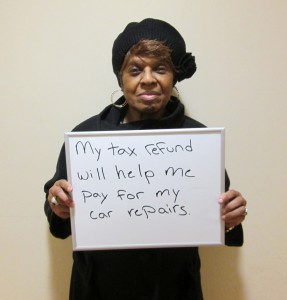 Audrey, a resident of the Hill district, worked full-time for Heinz Ketchup for 29 years. She liked her job and enjoyed working in every department, including serving as a supervisor.

In 1996, Audrey was diagnosed with rheumatoid arthritis. Her job was physically intensive and had high levels of stress which exacerbated the pain from her arthritis. She made the difficult decision of going on disability retirement, an earlier retirement then she had planned.

Though it was difficult, Heinz is a good company and still sends her a Christmas gifts every year.

Audrey heard about the Just Harvest free tax program from a friend and began getting her taxes prepared at the South Side site about 7 or 8 years ago. When the Bedford site opened, Audrey was thrilled to have this service just a few blocks from her home and has been going there for the last three years.

Prior to Just Harvest, Audrey was paying to have her taxes done at H&R Block and expressed that this free tax program is “very beneficial to me”. The volunteers are always “courteous and efficient,” making it a great experience for Audrey.

She recommends it to a lot of people saying that “it’s to your advantage to go instead of paying an astronomical amount of money.” Plus she says she has met some really nice people at Just Harvest.

In the past, Audrey has often used her refund towards medical bills and co-pays for medication, since she has a lot of expenses due to her rheumatoid arthritis. This year, she plans to put it towards her upcoming car inspection and the repairs that will be needed. With her arthritis and asthma it is critical that Audrey keeps her car up and running.

Poverty in America: Hope for the future
Our long-time tax clients Tim and Darlene