By Just Harvest on February 25, 2015 in Blog, News Releases, Newsroom 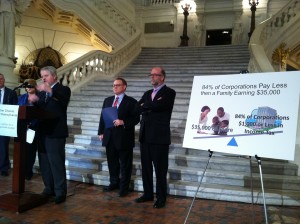 The Better Choices Coalition of PA releases its 19 tax fairness recommendations in Harrisburg.

“A recent study by the Institute on Taxation and Economic Policy named Pennsylvania the sixth most unfair state and local tax system for low- to moderate-income families. The recommendations we are making not only raise sustainable revenue for critical services like education and health care, but also make our tax system fairer for all Pennsylvanians,” said Michael Wood, research director at the Pennsylvania Budget and Policy Center, a member of the Better Choices Coalition. “Tax fairness can be achieved by raising some existing taxes, creating some new taxes, and providing targeted tax reductions for the low-income and the elderly. Our recommendations do that.”

The coalition’s push for tax fairness aligns with Gov. Tom Wolf’s Fresh Start campaign plan, which called for “income tax fairness for the middle-class” and “making sure all corporations doing business in Pennsylvania pay their fair share of taxes.”

The coalition’s recommendations include:

“Nearly 75% of Pennsylvania’s corporations pay a smaller percentage in taxes than many of the thousands of clients we see each year at our tax preparation program for low-income households,” Ken Regal, executive director of Just Harvest, said. “The state legislature and Gov. Wolf should correct the commonwealth’s embarrassingly regressive tax code. These changes will create revenue that can better serve all Pennsylvania citizens and grant much-needed relief to the 1.8 million Pennsylvania tax-payers who make less than $38,000 a year.”

The Better Choices Coalition is comprised of 35 organizations across the state committed to appropriate funding for education, health care, infrastructure, and human services to vulnerable Pennsylvanians and to investing in Pennsylvania’s families as a path to renewed prosperity.

The coalition’s other 14 recommendations are:

For more information on the recommendations, visit betterchoicesforpa.com.