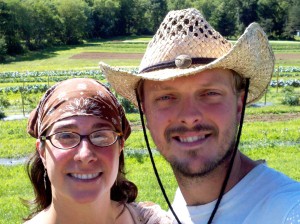 If you close your eyes and picture a farm you’ll probably imagine something common to Pennsylvania’s rural landscape: an old barn with peeling paint, an entire hillside spotted with sheep and cows. Or maybe endless rows of corn or wheat, the tall stalks waving as highway cars rush by.

You probably wouldn’t picture something like Edible Earth Farms, which lies in the Northeast part of the state on a small, flat piece of land between the Allegheny River and the Allegheny National Forest. It was started only about five years ago. Yet despite its newer structures and gleaming greenhouse, its owners—Johnny and April Parker—are no strangers to farming and food in general.

At the age of 12, Johnny biked to a nearby organic farm and asked for a summer job; he ended up working there for five seasons. But then after that early start in farming his career path followed a less direct route. His interests led him to culinary school, and then to dropping out after becoming disillusioned with the restaurant industry. He then switched course entirely, studying computer science at the University of Pittsburgh followed by software engineering and full-time employment at Carnegie Mellon University. Johnny eventually become the school’s director of systems and software development.

Similarly, April initially pursued a career in social services. She worked for several agencies in and around the Pittsburgh area. At the same time, she studied herbalism and aromatherapy, starting Cloud 9 Aromatherapy in 1997. 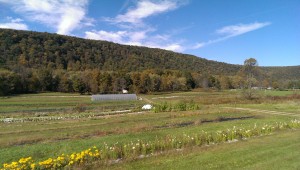 Although both were successful in their respective fields, the Parkers found themselves wanting the outdoors more than long hours staring at a computer screen. They looked for a way out. “For several years, my wife and I plotted our exit out of the city and into farming,” said Johnny.

They studied, attended conferences, purchased land and equipment, and became immersed in all things related to farming. They looked north to Forest County and the town of Tionesta. April established and moved to their farm there in 2010. Johnny followed a year later; they are currently in their sixth season and grow certified organic vegetables, herbs, mushrooms, ginger, fruit and raise pastured, non-certified pigs and chickens.

Edible Earth Farm has been selling at farmers markets since their farm’s inception. For those who have never been to a farmers market, Johnny states that they are missing out on one of life’s great pleasures: purchasing a super-fresh product from the hands of the person who harvested it.

In addition, the Parkers were thrilled to learn about Just Harvest’s Fresh Access program. “It’s a great program that allows growers like us to market to a much broader customer base without hassle and with minimal paperwork,” says Parker. Being part of the program has not only had a positive impact on their sales, but EBT and SNAP shoppers now have access to more fresh options that they may not have had in the past.

Overall, Parker says that while his path to farming has been a journey full of many tough lessons, he wouldn’t trade it for the world. Not surprisingly, when asked what farmers market item he would be, Parker picked the strawberry. “Everybody loves them; they’re sweet, healthy, and very seasonal.” They ripen in due time. 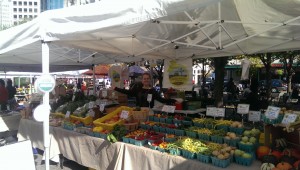 Andrew is a student at the University of Pittsburgh's Graduate School of Public and International Affairs. He is due to complete his Master of Public Administration in Energy and Environment in April 2016. He is serving as a Fresh Access communications intern through 2015.
View all posts by Andrew O'Rourke →