By Maria Muzzie on February 1, 2014 in Blog, Commentary 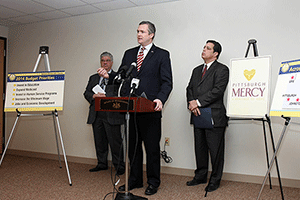 On January 30th, the anniversary of President Franklin Roosevelt’s birthday, Rev. Sally Jo Snyder of our sister organization Consumer Health Coalition, invited us to hear her speak at a press conference held by the Pennsylvania Senate Democratic Caucus.

“President Roosevelt created the New Deal for folks, who through no fault of their own, were dealt a crappy hand,” Rev. Snyder added, “Not one of us gets through on our own.  Each and every one of us is held by the social safety net – and isn’t it a good thing it’s there to hold us?”

State Senate Democratic leader Jay Costa (Forest Hills) also spoke of the importance of strengthening the safety net by expanding Medicaid. “These are the working poor.  These are folks who work every day and they deserve the opportunity to have healthcare.” 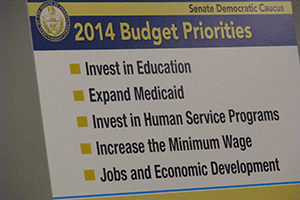 Sen. Matt Smith (Mt. Lebanon) then criticized Governor Corbett for his “draconian” cuts to education and called on Corbett to restore all of the dollars that have been cut.” It’s not only the right move, it’s the smart move for Pennsylvania,” said Smith. “We have to prepare the children of today for the careers of tomorrow.”

Costa also stressed the importance of Pennsylvania’s minimum wage being raised and of focusing on job creation.

Sen. Wayne Fontana (Brookline) called on the governor to do the right thing by Pennsylvanians. ” All of these priorities mesh together. These are all interconnected.”