On Nov. 6, voters in Pennsylvania’s 33rd House District will have a choice of two candidates for the office of State Representative: the incumbent, House Minority Leader Francis (Frank) Dermody (Democrat), or Joshua Nulph (Republican).

This district comprises the TOWNSHIPS of East Deer, Frazer, Harmar, Harrison (PART, Wards 01, 02, 03 [PART, Division 02], 04 and 05), Indiana and Springdale and the BOROUGHS of Brackenridge, Cheswick, Oakmont, Springdale and Tarentum. It also includes part of Westmoreland County.

We asked each candidate five questions about their stance on key policies to combat hunger in Pennsylvania. We did not receive a response from Nulph despite multiple requests, and were not able to determine his position based on public statements.

Dermody’s full response is below the graphic. 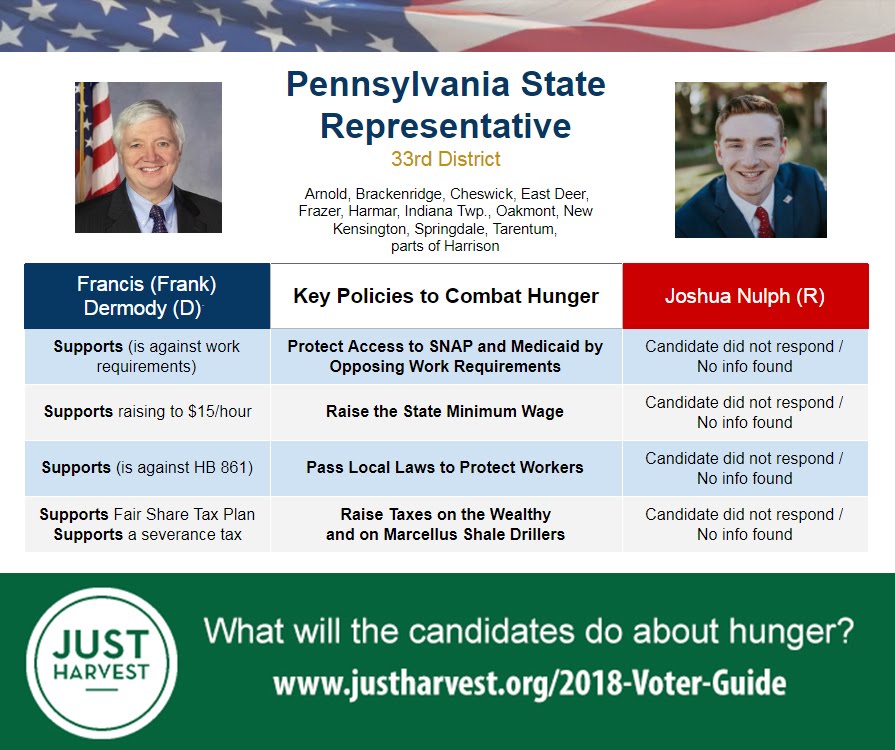 Frank opposes work requirements as a condition of receiving assistance. People need healthcare and food so that they are able to go find work. It doesn’t make any sense and is bad public policy to restrict these important safety net programs to only those who are working.

Frank would like to see our state’s minimum wage be set at $15 an hour but he recognizes in the current political environment in Washington and Harrisburg we may have to start with a more modest $10 or $12 and then increase the rate incrementally over the next few years to get there.  He supports tying min wage to an annual index that would ensure the min wage keeps pace with inflation and the cost of living.