On Nov. 6, voters in Pennsylvania’s 54th House District will have a choice of two candidates for state representative: Jonathan McCabe (Democrat) or Robert Brooks (Republican). Rep. Evankovich (R) held this seat until resigning in August.

This district includes parts of Westmoreland and Allegheny Counties: the TOWNSHIPS of Allegheny, Fawn, Penn, Upper Burrell, and West Deer, and the BOROUGHS of Export, Murrysville, and Lower Burrell City.

We asked each candidate five questions about their stance on key policies to combat hunger in Pennsylvania. We did not receive a response from Brooks despite multiple requests, and were not able to determine her position based on public statements.

McCabe’s full response is below the graphic. 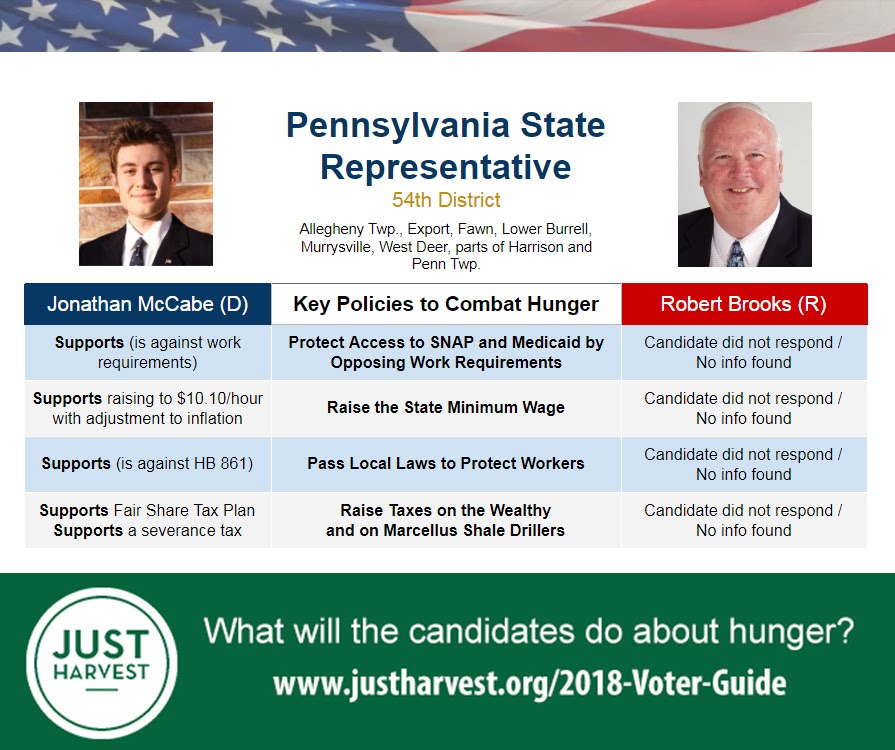 I do not support work requirements for access to benefits. As I mentioned, my family has lived through the struggle of not having a job and relying on benefits. Also, with the rise of globalization and automation, many average Americans are going to be faced with an increasingly difficult time finding jobs in the future. For example, one of the most popular jobs for workers without a college degree is truck-driving. But this industry is going to gradually become automated, and many workers are going to be faced with the difficult task of finding another job.

I believe that the minimum wage of the state should be at least 10.10, and it should be indexed to inflation. Minimum wage is great for small business growth because it puts money into the hands of people who support those businesses.

I do not support HB 861, or state laws that preempt on local labor protections. HB 861 would simply strip workers of local labor protections that are already implemented, such as paid sick days. HB 861 would also be an attack on LGBTQ Pennsylvanians because many local ordinances have already passed laws that prohibit discrimination on the basis of many protected characteristics, including sexual orientation. Local governments deserve the right to pass local ordinances that meet the needs and reflect the values of their own communities.