This is the second and final portion of the remarks made by Joel Berg, CEO of Hunger Free America, at Just Harvest’s 28th Annual Harvest Celebration Dinner in October. They have been edited for length and clarity. 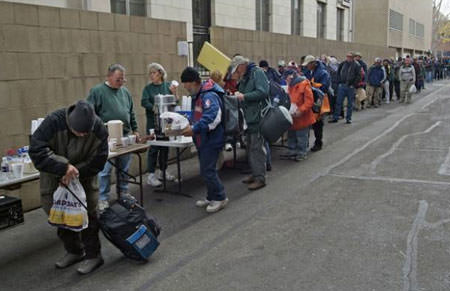 << Part 1 of How We Can End Hunger in America

How did we go from almost ending hunger in America in the 1970s to having almost 42 million Americans, including millions of Pennsylvanians, lacking enough food?

Because we were sold a myth.

The bucket brigades made us feel great. They were volunteers, the faith-based armies of their time. They didn’t need a big government bureaucracy. You didn’t have to fill out forms. It was just volunteers pitching in to help. It was America at its best.

There is only one eensy-teensy problem with the bucket brigades: they didn’t work. City after city burnt to a crisp. New York City in 1776. That cow knocked over a lantern and Chicago was cinders in days. Seattle and San Francisco had massive earthquakes, but it wasn’t the earthquakes that leveled the cities — it was the fires that followed.

So okay, let’s do one more experiment: Your house is burning down and you are on the third floor. You are with all your prized possessions. Which would you prefer? A volunteer bucket brigade, which may or may not show up. If they do show up, they have 60 gallons of water per minute and it may take a few hours to get there.

Or would you prefer a professional firefighter department with your tax dollars be on call 24/7 with 1,000 gallons of water per minute that can reach the second, third, and fourth floor or the hundredth floor that you are on? 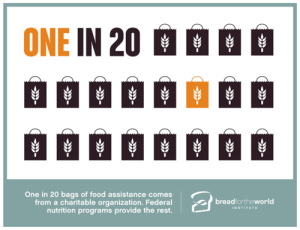 Today, the bucket brigades have been replaced by canned food drives. They make us feel good but they are not solving the problem. And this is no disrespect to you if you have supported food drives and the vital work of the Greater Pittsburgh Community Food Bank, one of the most progressive food banks in the country. And no slight to the wonderful people who are running soup kitchens and food pantries, who have been doing this incredible volunteer work for decades, taking money out of their own pockets to feed your neighbors.

But let’s face it: it is not working. Every year we are supporting charities and every year the problem is growing worse because there is something structurally unsound in our politics, our economy, and our society that must be fixed by something bigger and more serious.

No one ever picks the prescription drug drive for grandma, but that’s what a food drive is because we don’t trust poor people with money. God forbid if they don’t spend it on food they will waste it on something horrible like rent.

And that’s what’s going to end hunger in America: all of us standing up and saying we must make it a national priority that everyone in America should have affordable healthy food.

The Childhood Nutrition Reauthorization bill should be the least controversial bill on the planet. It decides who gets school lunch and school breakfast, who gets summer meals, which kids, how many women. Our nutrition program for pregnant women (WIC) has prevented half a million children from dying at birth.

And the vast majority of those in the House of Representatives who call themselves pro-life voted for cuts in that program. Let’s get real.

Now the House Republicans are trying to pass a child nutrition bill which not only takes away improvements in nutritional standards but also brings junk food back into schools doing the bidding of big food companies and takes away food from low-income people and increases the paperwork of municipalities.

Most people saying they are against government regulations are just fine with school districts having to fill out tons of paperwork to make sure a poor kid doesn’t get the meal that was meant only for a very poor kid.

We don’t have to conduct several think tank studies to know why we are experiencing hunger. Raising wages, creating jobs, and ensuring a nutritious meal plan is what has ended hunger in every other civilized industrialized western country and that is the only thing that can end it here. The only thing that is going to make that happen is building a social movement to make it happen.

I love Just Harvest because they combine direct service with advocacy. They don’t run from advocacy, saying “Oh it’s going to lose us funders and make people mad.” Tell me a social movement that was effective if they lost too much sleep about making people mad.

If we aren’t focusing on public policy, how can we end hunger? How can we reduce poverty without social policy and without public policy improvements? That is like asking me how we can end drought without water. You can’t do it.

If you’re thinking, “Oh, our politics are too messed up. We can’t fix everything and it’s the system’s fault. The politicians fault. Let me just do the little food drive thing.”

Then let me just say: you have no heart. 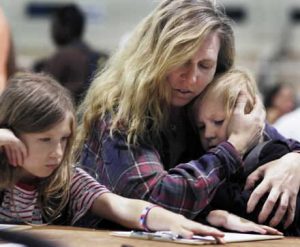 Heart is the first Native American crossing over the land bridge in the Bering Strait to try to find a better land.

Heart was people crossing over the Independence Bridge in Selma, getting the crap beat out of them because they felt they had the right to vote despite their skin color.

Heart was landing on Utah Beach in Normandy, with mortar fire and machine gun fire.

Heart is a mother of three looking into her kids’ eyes and saying they aren’t going to have enough food tonight. That’s heart.

And the good news is you can be part of the movement that’s finally going to end hunger in America and ensure all Americans have healthy nutritious affordable food, so America can enter the civilized world.

GET INVOLVED WITH HUNGER FREE AMERICA