The following remarks were made by Joel Berg, CEO of Hunger Free America, as the keynote speaker at Just Harvest’s 28th Annual Harvest Celebration Dinner in October. They have been edited for length and clarity.

Berg is a nationally recognized leader and media spokesman in the fields of domestic hunger, food security, obesity, and poverty, among others. In addition to numerous other accomplishments, he served for eight years in the Clinton Administration in senior executive service positions at the United States Department of Agriculture, which oversees the nation’s nutrition assistance programs. 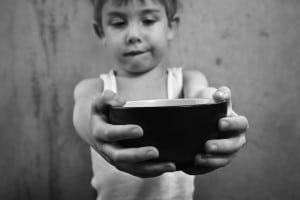 The people going hungry in America aren’t lazy. They are poor. They simply do not earn enough to feed their families.

That is the reality I have to grapple with and what Just Harvest deals with on a daily basis.

I have good news and bad news for you. First the bad news: We are the only industrialized Western nation on the planet that has anything close to this level of hunger and poverty, even per capita. Look at a list of nations around the world and their levels of food hardship. America is trailing the Slovak Republic and Greece.

We don’t have people starving in the streets like in Somalia or North Korea, because we do have some safety net programs. We do have a minimum wage, although it is too low.

Yet the Center for American Progress, where I used to be a senior fellow, has calculated that hunger costs our society $167 billion a year:

I calculated that you can end hunger in the U.S. entirely by raising the food purchasing power of low-income Americans by $25 billion. If we could do it all through wage increases that would be great, although most hungry people in America are children, senior citizens, and people with disabilities. So you would probably need a combination of increased wages and improved safety net programs — like the civilized world that doesn’t have this level of hunger has.

“Oh,” you say, “that’s crazy. 25 billion dollars? That’s so much money!” That is about a third of the money Bill Gates has in the bank.

Or put another way, hunger costs this country $167.5 billion a year. We can solve it for $25 billion.

If you are a homeowner and there is a hole in your roof that costs $167.50 a year in extra heating or cooling costs. A handy woman or handyman comes and knocks on your door. You know they’re honest, bonded, and your neighbors say they do great work. They say they can fix that roof for $25. Would you take the deal? You would take the deal.

Then why aren’t we taking that deal in America? Because we had a more inclusive safety net and a more inclusive economy — a living minimum wage, union rights, and jobs with benefits — we almost entirely ended hunger in America in the 1970s. How do we know? Because in the 1960s, teams of doctors had traveled around the country documenting third world starvation.

We are told the War on Poverty was a failure. It’s just not true. The War on Poverty started during the Kennedy Administration. (Kennedy actually signed by executive order the Food Stamps program into law when President Eisenhower refused to implement it because he thought hunger wasn’t a problem.) Richard Nixon, who created the WIC program, continued much of the War on Poverty. So it lasted from 1960 to 1974.

The poverty rate in America during that time was cut in half. 16 million Americans left poverty and entered the middle class.

Yet we are told public programs don’t work.

“Well there is still some poverty, it didn’t work,” people say. Imagine judging every other program by the metric that if it doesn’t eliminate a problem entirely then it didn’t work. By that metric, not a penny ever spent on military or intelligence ever worked because we still have enemies. It makes no sense.

The idea that there can be tens of millions of Americans “working full-time and playing by the rules,” as my old boss Bill Clinton used to say, and still going hungry would be unfathomable to most Americans a few decades ago.

Let’s not accept this as the new normal.

What Muslims believe about poverty and human dignity
Joel Berg: How We Can End Hunger in America (Part 2)