By Just Harvest on October 12, 2015 in Research Papers 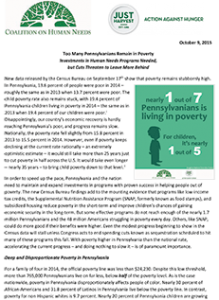 Nationally, the poverty rate fell slightly from 15.8 percent in 2013 to 15.5 percent in 2014. However, even if poverty keeps declining at the current rate nationally – an extremely optimistic estimate – it would still take more than 25 years just to cut poverty in half across the U.S. It would take even longer – nearly 35 years – to bring child poverty down to that level.