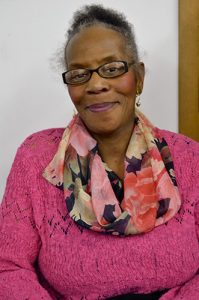 Janet Baker has been a Pittsburgh resident her entire life, she told me with a pride and joy in her eyes that lasted the entire time we spoke. She is a mother of two, grandmother of seven, and great-grandmother of fourteen. Being each of these roles means so very much to her.

But the other role she holds, which has just as much of a place in her heart, is as someone who has ceaselessly helped those in vulnerable and hard times.

She began this role earlier in her life as a drug assistance counselor at St. Francis Medical Center for thirty-five years. Even though the work was “very hard and trying” she got so much fulfillment from seeing her clients throughout the process of counseling.

For the past five years Janet’s employment at the Urban League, in their hunger services division, has allowed her to continue her work helping those in need. This work – particularly in her role as one of the leaders of the food pantry – has led her to cross paths with many of her former counseling clients, which fills her with so much joy.

Unfortunately her position was terminated due to funding cuts that took a sever toll on the Hunger Services division. Because of her passion and determination she found a way to continue her work within this division through the “Mature Workers” training program, but this change meant a severe pay cut and consequent change in lifestyle.

Since 2011, Janet has been getting her taxes done with Just Harvest, a member of the United Way Money In Your Pocket Coalition, whose 12 partner agencies provide free tax services to qualifying Allegheny County citizens. Our IRS-certified volunteer tax preparers help every one of our clients keep as much of their earned wages as possible by helping them avoid tax filing fees and by making sure they access whatever tax credits they are eligible for, like the Earned Income Tax Credit or Child Care Tax Credit.

Because of her change in income, this assistance has meant so much to Janet and the many others like her who have had to suffer because of the budget cuts that nonprofits like the Urban League have faced.

These challenges, even though incredibly hard, seem to be cracks in the sidewalks, not hurdles to jump over, for Ms. Baker. With her strength, resilience, and the support she has received she has managed to continue to be a light in the lives of the people she serves at the Urban League.

Maryann is a Chatham University Bonner Leader at Just Harvest. You can read more about her here.
View all posts by Maryann Fix →