By Just Harvest on March 27, 2015 in Barriers to Benefits, Blog, Get Involved, Take Action! 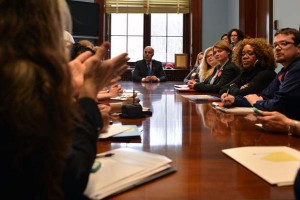 Every budget is an expression of priorities – what matters and what doesn’t, what gets funded and what won’t.

Following the 2014 election Republicans are now the majority in our federal legislature, but the budget they’re proposing will only benefit a slim minority of Americans.

This week, the U.S. House took its first official steps to advance this budget, which over the next 10 years would cut $5.5 trillion from education, transportation, healthcare, and programs that are critical lifelines for the poor and hungry, while increasing military funding. If passed, this budget would be disastrous for low- and middle-income Pennsylvanians.

What the Republican House committee members approved in the budget, which was later approved in a full House vote:

The U.S. Senate has now approved a similar budget. The next step will be for the House and Senate to try to reconcile their two budget versions by April 15.

We need to make Congress hear that this budget does NOT express the priorities of a majority of Americans.

The budget process has only just begun. Much work lies ahead. But we can take action now to join hunger advocates and legislators to block a key part of this budget and protect the nation’s cornerstone social safety net programs, including food stamps.

Sign this petition from Food Research and Action Center (FRAC) and raise your voice against hunger.

Sign this petition too via the National Priorities Project. Support the Congressional Progressive Caucus in pushing for a People’s Budget.

We encourage you to also tweet at your Senators and Reps with personal stories about why they should #StopTheCuts.

Soup’s on! The 33 restaurants’ soups you’ll find at the 2015 Empty Bowls
Join us this summer! Internships and VISTA positions now open