By Just Harvest on April 14, 2021 in Commentary, Not just a number, Our Programs 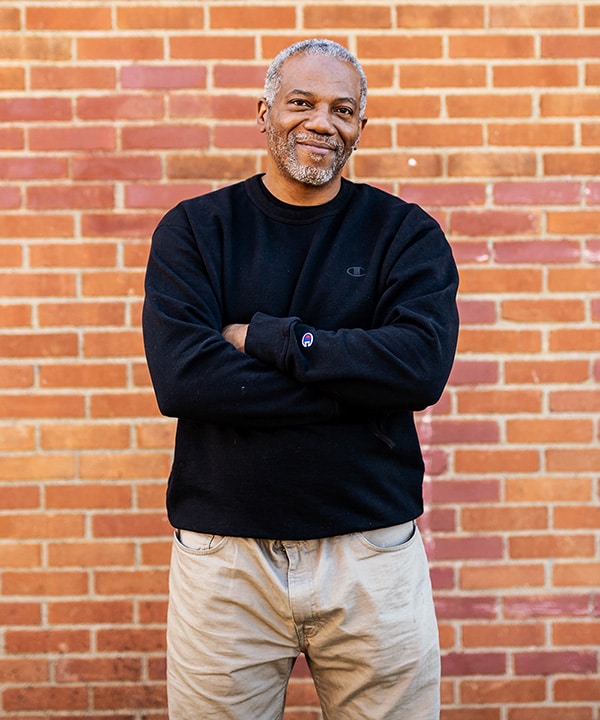 “I grew up primarily in East Liberty or ‘E’sliberty’” Harrison Zellous said with his charming smile, pronouncing the Pittsburgh city neighborhood like those native to the area do. And like the neighborhood, he has undergone many struggles and changes over the prior decades.

Recalling his childhood, Harrison “had a mother and father in the home, went to church several times a week – too many if you ask me.” The true middle child of seven siblings, three older and three younger, Harrison was a preacher’s son.

Eventually, he had a son of his own and the honor of helping to mold many young men and women. As a result, he claims many grandchildren “who I owe my life to. Without their love and a hope for them, I would have given up, totally.” They call him Pap Pap.

“Sometimes it’s so hard to just move forward. The weight of all the things I didn’t do that I wanted to do, all the good intentions I had only to be here at this crossroad writing my story at 52 years old.”

He says his story is one that was born out of despair and raised into hope. “My phone is ringing. I don’t hear it so I just call the number back and on the other end my life is changing, only I don’t know it, but I’m so calm and relaxed by this voice. By the words, the experience, the willingness, the humility, and powerfulness. I can’t by myself, ‘but we can together, Harrison!’”

The voice on that phone, the one calling him, the first time anyway, was Amanda Sloane, one of our food stamp specialists. She had received Harrison’s voice message that he needed help, one of the hundreds that came in that month. For years, the PA Department of Human Services (DHS) has contracted Just Harvest to provide SNAP application assistance to eligible residents of Allegheny County. We also advocate for those whose SNAP benefits (or “food stamps”) DHS has unfairly denied or terminated.

When the pandemic hit in March 2020, DHS closed all their County Assistance Offices to the public to comply with public health guidelines. This meant unhoused people like Harrison, and so many others, no longer had a place to go to get help. DHS only resumed their SNAP application support this past week, over the phone, a year after they’d stopped. During that time, Just Harvest was a critical resource for thousands in Allegheny County. The need for our help reached levels we hadn’t seen since the Great Recession. 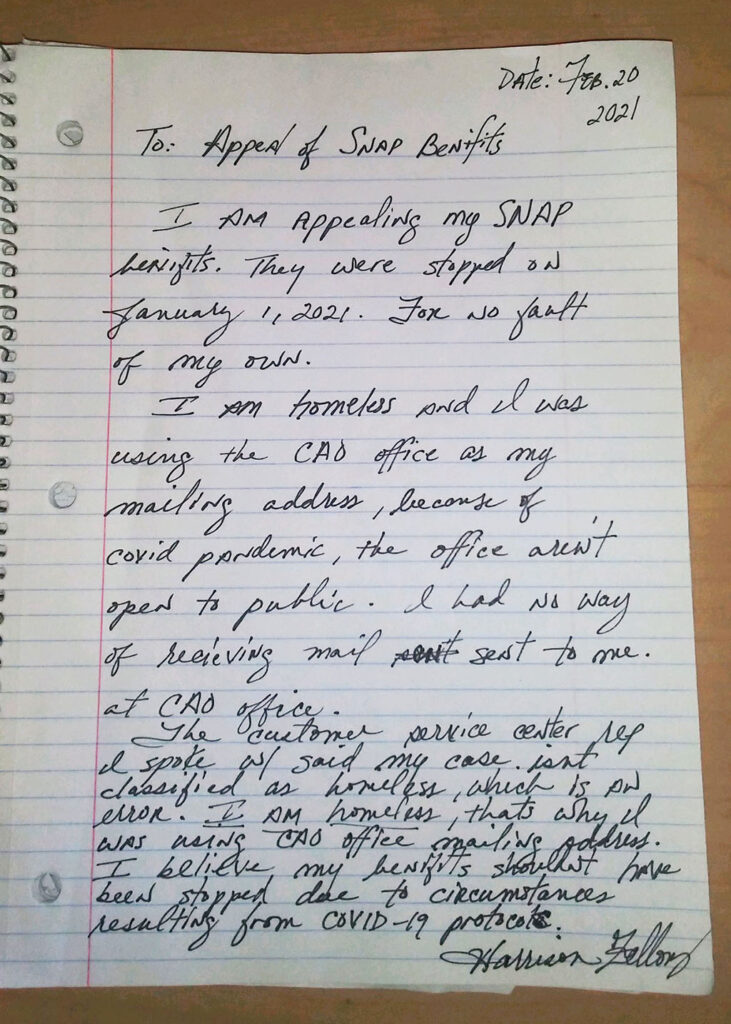 This isn’t easy on no one, but if we don’t work for the betterment of all…then what are we doing?”

In a “normal” year, one in eight people in Allegheny County are dealing with food insecurity and hunger. Yet the federal program has many bureaucratic hoops to jump through to get and keep SNAP benefits (or “food stamps”). For example, every six months, recipients must fill out paperwork proving they’re still eligible for SNAP. The benefit is, on average, $4 in assistance per person a day.

When the pandemic hit and CAOs closed, Just Harvest and other advocates pushed the state to end these semi-annual renewals and annual recertifications. Too many people – those with literacy issues or vision impairment or other disabilities, those without internet access or stable housing – wouldn’t be able to submit all the required paperwork and get their questions answered without the help of DHS caseworkers at a CAO.

The Wolf administration readily agreed and canceled all required paperwork and interviews for SNAP. But in September, the Trump administration told states they could no longer allow their citizens that flexibility, despite deepening hunger and hardship in low-income communities and communities of color.

Congress succeeded in pushing back, but PA was cowed. The state continued to suspend SNAP application and renewal interviews but resumed SNAP paperwork requirements. DHS predicted the federal government would eventually require recipients to submit all documents; it wanted to avoid a backlog that might cause even bigger SNAP access problems down the line.

But this decision had huge ramifications for people like Harrison. Those without stable shelter typically use the CAOs as their mailing address. When DHS closed the CAOs, Harrison had no way of getting the renewal paperwork the state had mailed to him. He didn’t even know it was there. 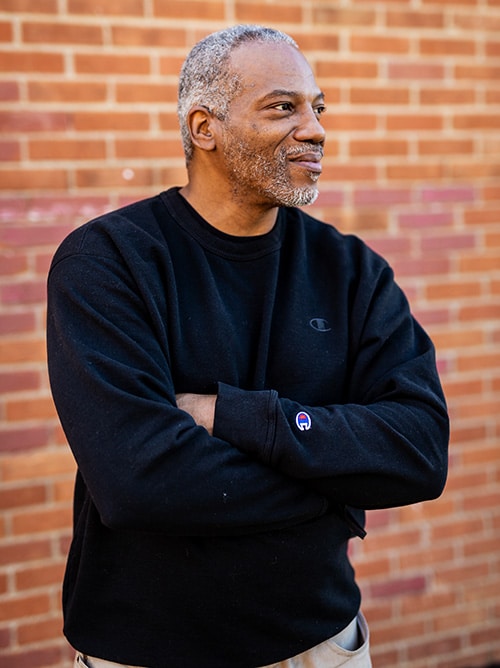 “No one thought it through, they just closed my case unbeknownst to me. By the time I realized and made some calls I had lost a month of benefits, due to no fault of my own, and on top of that my benefits were lowered from previous years.”

The state terminated Harrison’s benefits on December 30, just as the worst of winter was underway. When the benefits didn’t arrive in January, he called DHS’s benefits hotline. Customer service told him he’d need to reapply. They referred him to Just Harvest.

Amanda quickly got his benefits reinstated. But the state didn’t approve the three weeks of benefits he had been unfairly denied: $76 of critical food assistance. And since DHS approved his application later in the month, Harrison had also missed out on additional pandemic benefits, called Emergency Allotments, for January. When Amanda called DHS to inquire about the missing benefits, they told her it was past the 30-day reconsideration time, which ended January 30.

But our policy advocate, Ann Sanders, knew that the SNAP appeal deadline is 90 days, so she filed one. Harrison wrote up his appeal; Ann submitted it and won. DHS then told her the state would issue his emergency allotment as well as the missing three weeks of benefits during a routine batch clean-up of all missing benefits on March 5.

The following day, his caseworker contacted us to say we could withdraw our appeal because Harrison had received his missing benefits. Only he hadn’t, which we pointed out. He was still short his three weeks of benefits, $76. She issued him a one-time payment for the $76 on March 10.

Harrison’s case was resolved. But all the errors along the way spoke to larger problems with the system. Who else had they affected? Who else had the state missed when their “clean-up” didn’t fix the problem?

We pressed the state to look into these questions. In doing so, they found at least 13,000 Pennsylvanian households who had newly applied for SNAP in January and not received the full amount they were due on March 5. The state issued another payment to those households to correct the error. 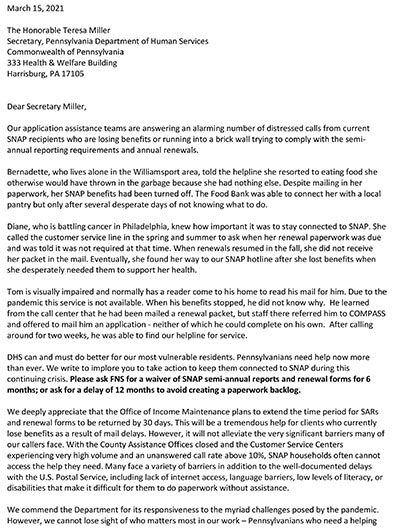 Just Harvest and other advocates’ letter to PA DHS about improving key SNAP administrative policies.
Click to read the letter.

And what of the missed renewals – all those who have to use CAOs as their address and had lost SNAP because the buildings that held their paperwork were closed?  Just Harvest raised this at the next of our periodic meetings with DHS. They explained they thought they had prevented that from happening by exempting all homeless recipients from the renewal and recertification requirements during the pandemic. They already had a code in the system to identify which SNAP recipients are homeless. Harrison’s account, it turns out, was missing this code. DHS failed to realize that a coding system only works if every caseworker uses it correctly.

Just Harvest requested DHS pull a list of all SNAP recipients whose address matches that of a CAO and check they had applied the same exemption code. Ann has been working since then with DHS policy staff to make sure this happens. No one should have to worry about losing public assistance due to a bureaucratic error, especially not someone already dealing with homelessness, and especially not during a pandemic.

But requiring paperwork for semi-annual and annual SNAP renewals has been a longstanding source of such errors, which the pandemic has made even worse. We brought Harrison’s story along with a few others to DHS to make that clear. Requiring vulnerable people to fill out complex paperwork twice a year makes them liable to losing their benefits despite still being eligible.

To make SNAP simpler and easier to access, we have to also prevent DHS from unfairly terminating people’s SNAP benefits due to inadequate procedures. When the new secretary of DHS starts takes office later this month, we’ll resume making this case.

In the meantime, DHS says they hear our concerns and are trying to find a resolution that meets the needs of both their clients and their workers. Starting this month they are putting in place a 30-day grace period for people who miss their semi-annual renewal deadline, but not the annuals. 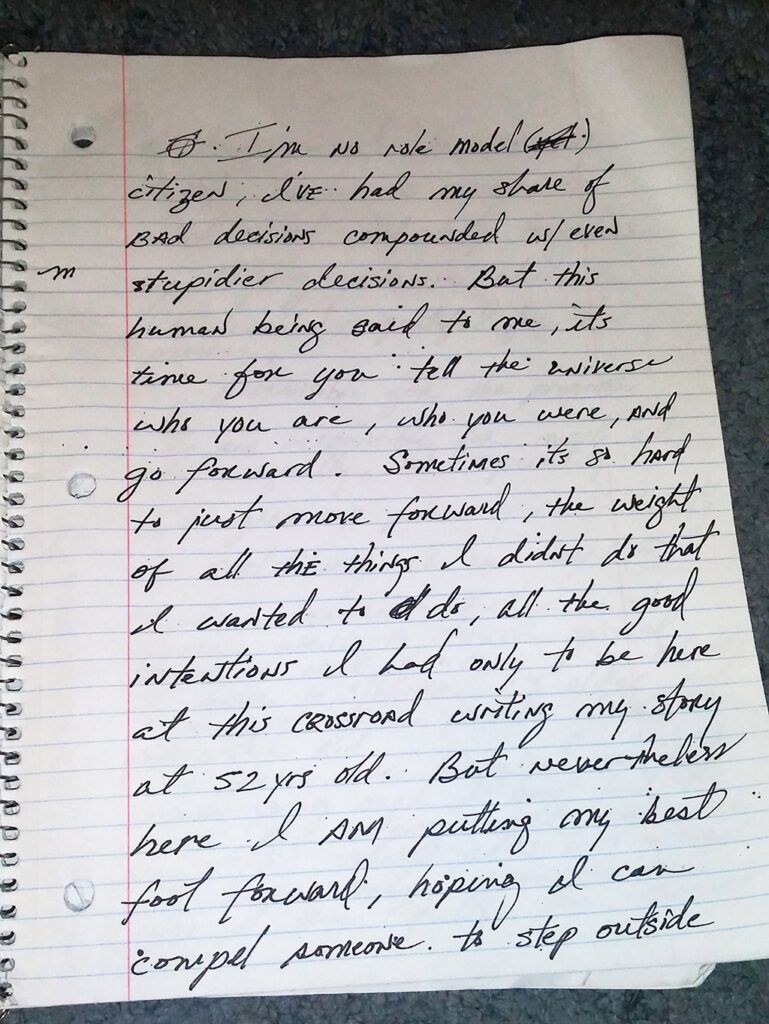 At the end of the day, the benefits system is just that: a system. Close individual attention and attentive care for each Pennsylvanian in need simply aren’t possible. Making sure individuals don’t fall through this system’s cracks and gaps is why Just Harvest will continue our case advocacy. Our policy advocacy aims to improve the system for all who might ever need it.

Lifting up the voices of those whose well-being depends on this assistance is critical to our mission. Harrison’s experiences demonstrate how government policies play out in the real world, how rules and regulations determine whether somebody eats or doesn’t. People like him must be able to share their experiences, their insights, and become advocates for change on the policy issues that affect their lives.

“I’m no role model citizen. I’ve had my share of bad decisions compounded with even stupider decisions.” But as he wrote, our grassroots organizer, Dana Dolney, told him, “It’s time for you to tell the universe who you are, who you were, and go forward.”

This isn’t the end of Harrison’s story; it’s the beginning of his advocacy. “I’m grateful for the process but I’m responsible for the progress. We must find the seeds of hope, love, accountability, progress, humanity, and replant these seeds for a just harvest.”