By Ken Regal on November 9, 2016 in Blog, Commentary, Get Involved 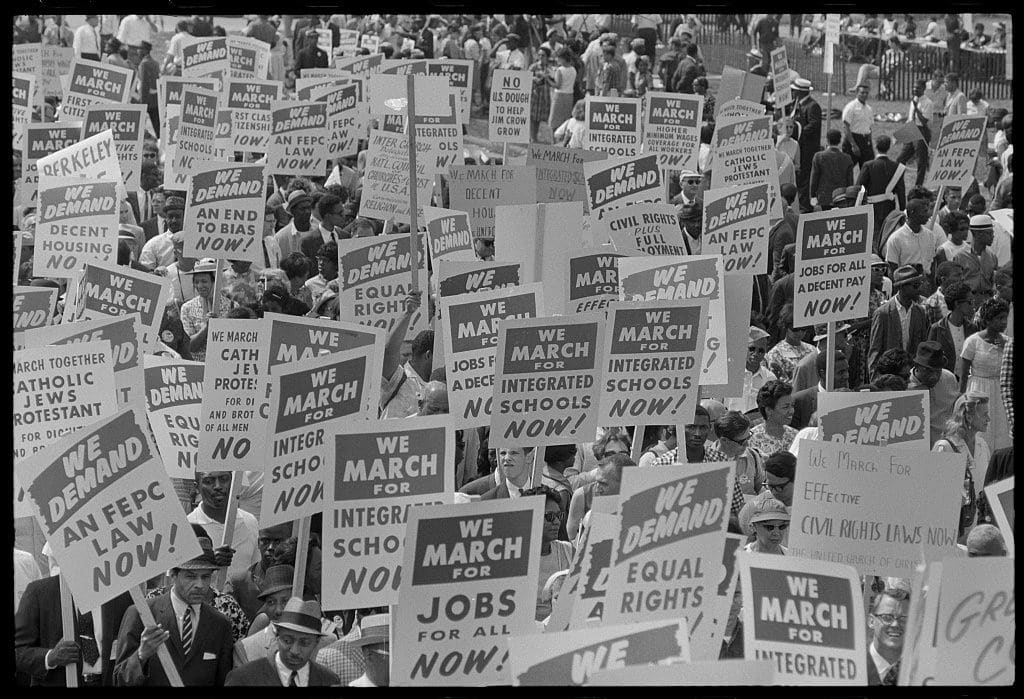 Signs carried by many marchers, during the March on Washington for Jobs and Freedom, 1963
(Marion Trikosko | Wikimedia Commons)

After a long political season, 125 million people voted in yesterday’s presidential election. Like many of them, I awoke this morning worried about the future. Whatever issues motivate us most deeply and whomever we voted for, important and difficult challenges lie ahead for our nation and our community.

For progressive activists and our many, many friends, there may be despair about the prospects for progress, cynicism about the democratic process, or anger at those with whom we disagree. But now is not a time for despair, cynicism, or anger. Rather, it is a time to creatively reflect on how to build the future we want and to re-engage in the hard work of building that future.

All the great movements for justice in history have suffered setbacks. Part of what makes an idea into a movement is the resilience to advance in the face of such setbacks. At Just Harvest, in the cause of social and economic justice, we place ourselves squarely in the tradition of past movements for progress: the abolition of slavery, women’s liberation, civil rights, marriage equality, and so many more. We are inspired not only by their victories, but by their ability to face and overcome obstacles.

Last night’s election results revealed frustration with business as usual, and discontent with decisions made by the few instead of the many. Like us at Just Harvest, millions of voters across Pennsylvania and elsewhere are tired of inequality and injustice; tired of the fact that hardship and deprivation can persist despite the nation’s enormous wealth.

But these results also revealed that too many still don’t understand the causes of America’s inequality and what our government should do about it.

Just Harvest is a non-partisan organization. We do not endorse or oppose any political party or candidates for public office. We do work to hold all public officials accountable for how their policy decisions affect people in our community who struggle with hunger and poverty. One of the core principles that drives Just Harvest is that “Hunger is political, and to end it requires collective political will.”

“Politics” is not an election-day phenomenon. It is year-round engagement in the work of translating our values into public decisions. Now is the time to get to work.

Now more than ever, we must find the strength and wisdom to build the political will to end hunger and hardship. We must summon our collective energy and passion to end economic injustice and to protect the basic dignity of all people. We must continue to speak out for good and fair governance.

Despite the pull of despair, cynicism, and anger. Despite the obstacles.

We hope you’ll join us.